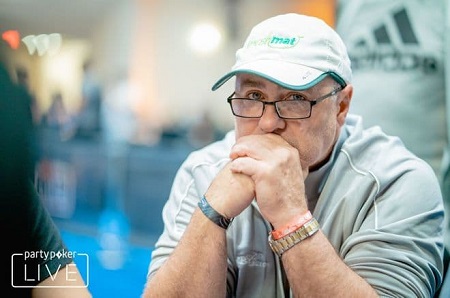 The island life. There's nothing quite like it. Sun. Sand. Umbrella drinks. Aquatic sports. Bikinis. The faint smell of reefer. Alien conspiracy theories. And poker. How could we forget poker? partypoker threw a bodacious party in the Caribbean a couple of months ahead of their competitor with a red spade, which includes a $10 million guaranteed Main Event. The Main Event is underway, but the $50,000 Super High Roller played down to a champion.

The white sands of Baha Mar in the Bahamas is a perfect location for the latest stop on the partypoker LIVE circuit. The Caribbean Poker Party kicked off on November 9 and will run until November 18.

The $50,000 Super High Roller attracted 54 players. Only the top seven places got a cut of the cheesecake, with the majority of cash going to the champion. The total prize pool for the $50K SHR topped $2.6 million.

Ali Imsirovic crushed everyone in his path in Las Vegas last month during the Poker Masters. He won back-to-back events and edged out David Peters for the Purple Jacket. The Purple Jacket winner final tabled another SHR affair, but he settled on a third-place finish. Imsirovic banked $400K for third, and his exit set up the heads-up finale between Sean Winter and Venezuela's Giuseppe Iadisernia.

Winter had to settle on a runner-up finish. For second place, the American took don $550K. Not too shabby, eh?

Giuseppe Iadisernia won the SHR, which paid out $845,000. Talk about a sick score for a couple days of work in the Bahamas. You can buy a lot of frozen rum drinks with that wad of cash.

This is the largest cash for Iadisernia's career. At the end of the summer, he banked $190K for finishing in third place at the 2018 Seminole Hard Rock Poker Open $50K High Roller in Hollywood, Florida.