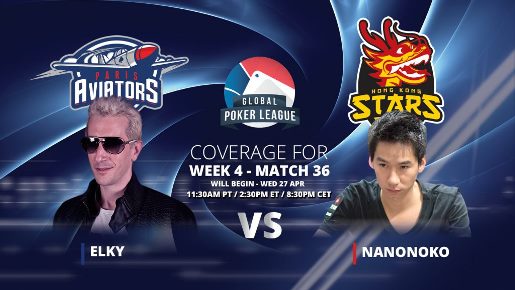 Another big week of heads-up action in the Global Poker League. Yes, the GPL was always looking ahead in an attempt to sportify poker, but they will definitely need a boost of fresh blood from the gaming world, if they hope to thrive over the long haul. Luckily, with a guy like Elky, it's easy to pull in interested stragglers from the gaming realm. Then again, doesn't matter if you're the gambling world or the gaming world, because everyone is going nuts over the Paris/Hong Kong battle with Elky taking on Randy ‘nanonoko' Lew. Hong Kong is trying to stay in the front of the pack, while Paris is hoping to retain their lead against a surging Moscow Wolverines.

Anatoly Filatov had a hot Tuesday with a first and second place finish in his matches. Can the Moscow team manager keep up his run good for another day? He's going to have a difficult assignment tackling Vanessa Selbst. Meanwhile. Rome Emperor's team manager Max Pescatori is hoping that one of his oldest friends from Las Vegas can come through for the family back in the old country. It's almost like a scene out of the Godfather. After all, Brunson's old man IS the real OG poker ganstas Doyle Brunson himself. Rome needs a sweep to help keep them out of the cellar for another week. Berlin has not been doing so hot either this season, so Berlin's hopes are on Jeff Gross to fend off Brunson.

In the EurAsia Conference, the Paris Aviators stayed in first with a win by Alex 'Alexonmoon' Luneau, but their lead has been narrowed down to a single point after a sensational day from Moscow Wolverine's team manager Anatoly Filatov, who posted a second and first place finishes for a day-high 12 points. In the Americas Conference, Olivier Busquet won the first match for L.A. Sunset and San Francisco's Anton Wigg won a much-needed match to pull the Rush out of the dumpster. New York Rounders had an off week, yet still retained first place.

Paris Aviators got off to a good start once again when Alexonmoon defeated Anatoly Filatov heads up for the victory and a crucial 7 points. Alexonmoon did not fare as well in the second match and busted in fifth place, but he still picked up at least a point and tallied 8 overall for the day to keep Paris in first place with 48 points. The Moscow Wolverines, led by manager Anatoly Filatov, notched 12 points with a 1-2 finish today. Filatov dropped the first match against Luneau, but he beat Berlin's Jeff Gross heads up to win Match 32. Moscow leaped into second place overall, trailing Paris by a single point with 47 overall. Hong Kong Stars had an off day, which opened the door for Moscow to sneak into second overall. Team manager Celina Lin busted first in the opening match, but managed a third place finish in the second match to save face with 3 points. Meanwhile, Rome's woes continued with just a single point today. Yeah, they posted another donut after Walter Treccarichi busted very early in Match 32.

Good day for the L.A. Sunset. Olivier Busquet, still healing but riding high off his MMA win, won Match 33 by beating Sao Paulo's Darren Elias heads up. Busquet finished in fourth in Match 34 for two points, or 9 overall for the Sunset, who desperately needed points to compete with the front runners. Montreal Nationals came into Week 4 in second place. They were hoping for a big week, but they posted a donut in the first game when Jason Lavallee busted first. In the final match of the day, Las Vegas' Scott Ball was a last-minute replacement for team manager Chris Moneymaker. Ball found himself heads up against Anton Wigg (also a last minute replacement by the San Francisco Rush). Both teams were at the bottom of the division and desperately needed the win. Wigg took it down and picked up a much-needed 7 points, which pulled the Rush out of the basement…finally. Sao Paulo is currently in last place.