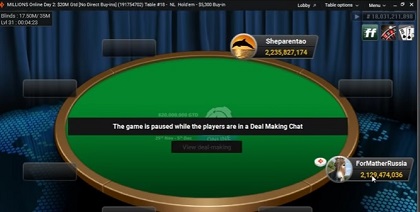 The big winner is partypoker. They pulled off a feat that John Duthie described akin to The Italian Job. partypoker set out an ambitious goal: to beat PokerStars and host the biggest online tournament of all time. It was hard to beat the WCOOP numbers during the height of the poker boom. Could partypoker pull it off without the American and Australian market? Well, they didn't have to sweat the $20 million guarantee because they attracted well over the 4,000 break-even point.

When the dust settled, a total of 4,367 runners took part in the MILLIONS Online event that had five opening flights. partypoker did the work and ran a bunch of satellites, which boosted the overall numbers. Heck, even one guy parlayed a $5 sat into a seven-figure cash. Scarmak3r from Slovenia won a ticket into this $5K buy-in event through a $5.50 satellite. Scarmak3r went all the way to the final table and finished in third place for a $1.3 million score. That's one heck of a way to boost your bankroll.

The top 500 places would pay out with most of the money set aside to the top four place. The final four would walk away with at least a cool million each. Not too shabby for a couple of days of work, eh?

With eight to go, orginALUS was the first player to exit the final table. Heading into the final day, wheatforsheep held the chip lead. Unfortunately the player from Mexico failed to go wire-to-wire. wheatforsheep hit the virtual rail in seventh place.

Pedro "Maddonaa" Marques from the Netherlands was the next to bust in fourth place. Maddonaa locked up a cool million for his efforts.

Slovenia's Scarmak3r hit the bricks in third place when his baby pair was no good against Sheparentao's pocket sixes. Still, Scarmak3r is probably the story of the tournament. Anytime you turn $5 into a million is a pretty sick tale.

That set up a finale between ForMatherRussia and Sheparentao. The final two were almost even in chips. They did not waste time and discussed a deal. There was not much discussion because they agreed to the terms without any hassles.

Sheparentao held a lead of 2.2B to 2.1B when action was paused to discuss the deal. Sheparentao was the chipleader and go slightly more in the heads-up chops.

ForMatherRussia from Malta banked $2,309,994 for a runner-up finish. Not too shabby, eh? Sheparentao from the Netherlands earned a first-place payout worth $2,329,943.

For more details, head to the partypoker blog.

Check out a replay of the final table with Joey Ingram providing commentary from the rail...