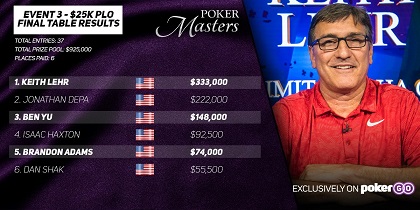 Two more events and two winners at the Poker Masters. The race for the purple jacket is heating up. Who woulda thought that the high-stakes poker world would be jockeying to win purple velvet! The 2018 Poker Masters completed two more events at the Aria Casino in Las Vegas. After four events, Brandon Adams still holds the lead in the tight race for the purple jacket. Adams final tabled three events and won Event #2 $25K NL, which earned him $400K and enough points to put him at the top of the standings.

Ben Yu's elimination in third place set up the heads-up bout between Depa and Lehr. Lehr picked off Jon Depa heads-up for the victory. Depa walked away with $22K. Meanwhile, Lehr shipped $333K and a boatload of points, which secured himself a spot in the Top 5 on the leaderboard.

Short Deck poker has been the rage this year and it was the focus for Event #4, which attracted 55 and a total prize pool worth $550,000. The final table included Dominik Nitsche, Cary Katz, Andre Robl, Ryan Tosoc, Maurice Hawkins, and Ike Haxton.

Tosoc's bustout set up a lengthy heads-up battle between Mo Hawkins and Ike Haxton. When the dust settled in their alligator-blood battle, Hawkins headed to the rail in second place. Haxton headed to the winner's circle and got to fondle a big stack of cash worth $176K. Hawkins banked $115K for a runner-up share. Not too shabby, eh?

At the end of four events, Brandon Adams is in the #1 spot with 510 points. He's got close competition because Ike Haxton's win propelled him into second place overall with 480 points. Keith Lehr and David Peters were tied for third with 300 points each. Jon Depa rounded out the top 5 with 270 points. Brandon has the inside track for the purple jacket, but the Poker Masters is far from over.

You can watch the action over at PokerGo through September 15, including the $100K which is on deck.

Four events are complete at the 2018 Poker Masters at the Aria Casino in Las Vegas. Keith Lehr won Event #3 $25K PLO and Isaac Haxton took down Event #4 $10K Short Deck. Lehr earned a payday worth $333,000. Haxton banked $176K for his win and he moved into second place overall in the leaderboard behind Brand Adams.