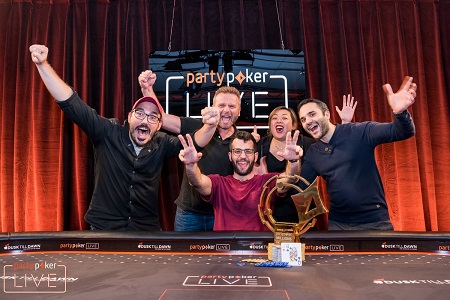 Alas, the final two cut a deal and chopped up the remaining money. Even with the deal, Angelou-Konstas still almost shipped a million pounds. In US bucks, he shipped $1.2 million. That sounds super awesome, eh?

Ryan Riess (the 2013 WSOP Main Event Champ) bubbled off the final table in ninth place. Riess walked away with 50K.

Ireland's Dara O'Kearney was the first player to exit the final table. Sam Grafton went deep but his run ended in fifth place.

Antoine Labat had a fantastic show. The French pro finished in third place, which was worth £440,000. After Labat's elimination, a heads-up battle was set between Alex Foxen and Ioannis Angelou-Konstas.

Ah, when the proverbial dust settled... Angelou-Konstas was the last one standing. Foxen was sent packing in second place.

Angelou-Konstas shipped the tournament and the mountain of cash, and the extra 100K for heads-up. In total, Angelou-Konstas won £940,000... or approximately $1.2 million.

Only the top 127 places paid out in the Nottingham Main Event.