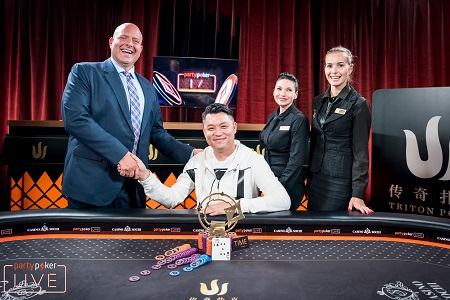 Ship it to Leow! Again!! Ivan Leow essentially came out of nowhere this year and made a splash on the High Roller scene. Leow took down the latest Triton Super High Roller event in Sochi, Russia at the partypoker LIVE MILLIONS. The 6,000,000 Rubles buy-in event attracted 20 players and 29 total entries. The SHR field featured several of the biggest ballers in poker including the likes of Phil Ivey, Niall Farrell, Tim Adams, Patrik Antonius. Oh, and we almost forgot to mention the Germans... Koray Aldemir, Philipp Gruissem, Johannes Becker, Dietrich Fast, and Manig Loeser.

At the end of Day 1, Maing Loeser was the chip leader and Ivey was third overall. Only 9 players remained out of 14. On Day 2, six more players entered the mix. Only the top 4 players would pay out with 72M Rubles set aside for the champ.

On the final table bubble, Ivan Leow knocked out two players in the same hand. Leow's pocket Aces held up in a multi-way pot against Tim Adams' Ace-Queen and Phil Ivey's Ace-five. The hand thrust Leow into first place overall in the chip count.

With eight to go, the final table was set. Leow led with 1.9M with a pair of Germans hot on his tail. Dietrich Fast and Manig Leoser were the only other players who had a stack over 1M. Also advancing to the final table were Niall Farrell, Abraham Passet, Wai Leong Chan, Paul Phua, and Wai Kin Yong. Phua and Farrell busted before the money bubble burst.

Dietrich Fast bubbled the SHR Sochi when he lost a flip against Ivan Leow. Leow whiffed on a flush draw, but backdoored an overpair to win the pot. Fast was picked off in fifth place. Fellow German Manig Loeser hit the rail in fourth place. Manig cashed for 8M Rubles or $282K USD.

Wai Leong Chan from Malaysiabusted in third place. Chan walked away with approximately $475K. Not too shabby for third, eh?

Chan's elimination set up a heads-up bout between Leow and UK's Abe Passet. The difference between first and second was 25M Rubles, or nearly $400K USD. Passet couldn't take out Leow and busted in second place. Passet's runner-up payday was worth $741K.

Leow has a day job... a pretty successful one at that. He's the managing director of an investment firm based out of Singapore.

Leow attended university in Australia where he focused on business. Leow also attended the Owner/President Management Program at Harvard Business School. Leow started out as a financial analyst and moved into the investment banking side of the biz. Leow worked for major banks such as HSBC and DBS before moving over to Mencast Holdings in Singapore.

Leow put in his time at the tables in Macau, which finally paid off this year. Leow made a name for himself in 2018. The businessman is no longer the dilettante. Leow now has $3.6M USD in career earnings with $3.5M from this year. Loew quickly moved up in limits and has been holding his own against the biggest SHR sharks in the world.