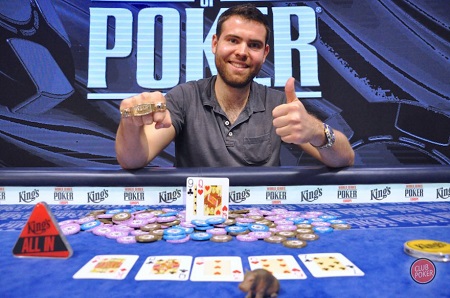 Ship it to Jack! The poker fun has finally come to an end at the King's Casino in RozVegas with the conclusion of the Main Event Championship. The marquee event of the 2018 World Series of Poker Europe played down to a final table last Friday. Jack Sinclair, a pro from London, England, won the tenth event on the schedule and capped off his trip to RozVegas with a win worth €1.1 million. The win also marked the first time he had ever won a bracelet.

Jack Sinclair went deep in a tournament in Vegas two summers ago. At the 2017 WSOP Main Event, Sinclair found himself at the final table after fading a field of 7,221 runners. Scott Blumstein went on to win the most memorable Main Event in several years defeating Dan Ott. Benjamin Pollak took third, John Hesp finished in fourth, and Antoine Sauot busted in fifth place. Sinclair finished in eighth overall and left Vegas $1.2 million richer.

A year and a half later, Jack Sinclair found himself at another final table. This time it was the WSOP Europe Main Event in RozVegas. Sure, it wasn't as stacked as the one in Vegas in 2017, but the final nine included heavyweights such as bracelet winner Ryan Reiss (and 2013 WSOP Main Event champ) and highstakes reg Koray Aldemir.

The 2013 Main Event champ, Ryan Riess, hit the bricks in fourth place. Riess was seeking a second bracelet win, but he'd have to wait until next year. The pro from Michigan shipped €337,778 for the deep run.

Krasimir Yankov's exit in third place set up a head-ups bout between Sinclair and Laszlo Bujtas. Alas, Bujtas could not stop Sinclair from achieving his first-ever bracelet win. Sinclair denied Bujtas, who settled on second place.

Sinclair banked $1,279,352 in US bucks for the win. Plus, the bling. Sinclair now has over $3.3 million in total tournament winnings.

Chainsaw Kessler cashed but he missed the final table when his epic run in RozVegas ended in 40th place.