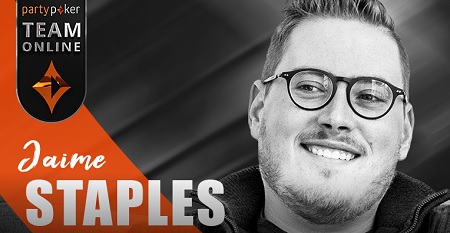 May the force be with Jaime. Hey, save the date and set your icalendar. There's something huge about to happen in a couple of weeks in the Twitch realm. Pretty much everyone knew it was coming but it's about to become a reality: Jaime Staples and partypoker. It was a match made in heaven. Jaime recently joined the ranks of Team Online and he will be on the same squad as his bro.

It seemed inevitable that the Canadian streamer would become an integral party of partypoker's online squad of Twitch streamers and popular content generators. Staples announced he was leaving PokerStars, which sort of came out of nowhere. And then the next day he was spotted grinding on partypoker. It seemed pretty obvious what was about to happen when partypoker snatched up his brother Matt Staples.

The brothers from Alberta made waves when they won that insane weight loss/gain prop bet with Bill Perkins. The Staples brahs have an impress tandem presence in the Twitchverse. Jaime is a legit influencer on multiple platforms with over 120K Twitch followers and over 87K subs on YouTube. In our modern digital world, the biggest currency is follower count and subscribers. partypoker's Team Online added a true megastar to its lineup.

But wait, there's more. Jeff Gross is also in the mix. Gross left Stars the same time as Jaime Staples. Gross banked over $4.5 million in combined live/online tournaments and he's a bona fide hybrid pro that can swim with sharks in real life and in the virtual waters. And if he plays a significant amount of WSOP events this year for its 50th birthday, Gross is destined to break through to the winner's circle.

Gross is a true lover of the game and his streams are full of kinetic energy. He's a fun follow (and I say that as a total jaded vet).

Oh and don't forget about partypoker's partnership with billionaire energy trader Bill Perkins brain child The Thirst Lounge. Perkins has his own unique way of approaching life (he's from the "work hard and live harder" train of thought) with a "life their best life" mantra, which is the philosophy behind the Thirst Lounge.

If that doesn't get you fired up, how about this nugget... Fedor Holz, who is a member of Team partypoker, will also be on Twitch in the future. Oh man, talk about a fun follow. Just to watch Fedor Holz play poker is a work of art. To hear him explain his process will be worth the price of admission.