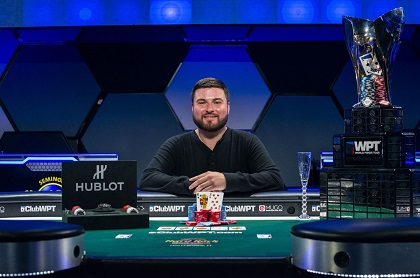 Ship it to James Carroll. The American pro took down the 2019 WPT Seminole Hard Rock Poker Showdown. He came into the final table with the chip lead and managed to fend off the other five players at the final table.

The 2019 WPT Seminole Hard Rock Poker Showdown started back in mid-April at the Seminole Hard Rock in Hollywood, Florida with the final table delayed until this week. The WPT threw a nifty curveball this year with delayed final tables that would be taped in Las Vegas at the swanky HyperX eSports Arena inside the Luxor Casino.

A total of 1,360 runners took a shot at a WPT title in Florida. The $3,500 buy-in event created a prize pool worth over $4.3 million. Only the top 170 places paid out with most of the cheesecake set aside for the final table and the top few places.

Chad Eveslage was the first player to exit the final table. For sixth place, he banked $148,380.

Jerry Wong was the short stack over the delay, but he laddered up a few spots and avoided becoming the first player to bust. Jerry Wong's ran eventually ended in fourth place. Wong banked $257,815 for fourth.

With three to go, Maria Ho was the short stack compared to Eric Afriat and James Carroll.

Ho made a valiant final stand with Ace-five against Carroll's King-Queen. She flopped an Ace to improve, but the board was

and Carroll flopped second pair and a Broadway gutshot draw. The

on the turn gave Carroll two pair, which held up. Ho hit the bricks in third place, which paid out $344,960.

Eric Afriat held nearly a 2-1 edge when heads up began. Carroll rallied from behind to pull off the comeback victory.

It took only 28 hands before Carroll seized the lead. Four hands later it was all over.

Afriat got it all in with pocket sixes against King-eight. Carroll flopped trip Kings and took the commanding lead. Afriat did not improve and he was picked off in second place.

For winning the 2019 WPT Seminole Hard Rock Poker Showdown, James Carroll took home $715,175. He also got a free roll (valued at $15,000) into the season ending Tournament of Champions at the Aria Casino in Las Vegas this weekend.