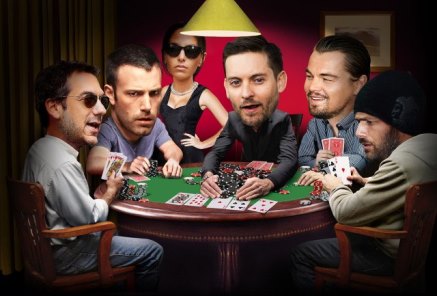 I love a good poker movie, but most of them fall short of the mark. Hollywood just doesn't understand poker like we do. That's why Rounders is such a timeless classic and rare cinematic gem because it speaks to us. The last film to come around, Mississippi Grind, was as good as I've seen since Rounders. The Boden/Fleck production of Mississippi Grind really captured the highs and lows of the gambler's life in a local's casino in the middle of nowhere America. The latest offering, Molly's Game, is quite the opposite. The latest poker film to get the Hollywood treatment will be focusing on the high-stakes world of poker where unsavory elements in the criminal world rub shoulders with some of the wealthiest actors, athletes, Hollywood players, businessmen, and celebrities.

Molly's Game: High Stakes, Hollywood's Elite, Hotshot Bankers, My Life in the World of Underground Poker is a memoir by Molly Bloom, a former skier with Olympic dreams. When she bubbled the U.S. team, she bounced around the poker scene while trying to figure stuff out. That's when she got sucked into the glitzy and glamourous world of high-stakes underground poker. She started out as a waitress serving cocktails in a private nosebleed game before running similar games herself featuring celebrities like Leo DiCaprio and Tobey Maguire. Her world came crashing down when a slew of armed federal agents showed up at her front door. She lived to tell about it and divulged a bunch of dirty secrets in her memoir, Molly's Game. The biggest dirt she dished was about Tobey Maguire. The uber-wealthy Spider-Man actor was taken behind the shed by Bloom for his miserly ways (the surly Maguire was a shitty tipper) and his utter paranoia that everyone was trying to cheat so he brought his own shuffling machine (and even had the balls to charge Molly a rental fee for using it).

The casting of Jessica and Idris in the two lead roles is any filmmaker's dream come true. They're two of the greatest actors of their generation, paired for the first time, and their chemistry will be electric.

Hollywood loves to adapt a best-selling book, so it wasn't hard for Molly's Game to get the greenlight. Aaron Sorkin became interested in the project…but not only as a screenwriter adapting the material to the big screen, but he also wanted to direct the film. That's a newstory itself because Sorkin had never directed anything before, so Molly's Game will mark his directorial debut. Sorkin is in a league with himself as a fantastic screenwriter and show creator (The West Wing, Sports Night, Newsroom) , but we'll see what kind of director he's going to be. With his overall style a big question mark, you have to assume he'll include his patented 'walk-and-talk' with lots of West Wingian, long tracking shots involving two characters popping snappy dialogue back and forth quickly as they walk down long, crowded corridors.

At least Sorkin got off to a right start by hiring two stellar actors to play pivotal roles. Oscar-nominated actress Jessica Chastain will come on board to in the title role as Molly. Chastain has been Hollywood's IT girl the last couple of years (The Help, Zero Dark Thirty, A Most Violent Year), so it's kind of a big deal when someone of her caliber joins a production…especially for a first-time director. Idris Elba is also joining Molly's Game and playing the role of her attorney. Elba is most famous for playing The Wire's Stringer Bell, a Baltimore drug kingpin with business-school savvy skills. Stay tuned for more info on production schedule and release dates.

Now go watch a super-cut of classic "Sorkinisms" that he often rehashes in his scripts for different projects...