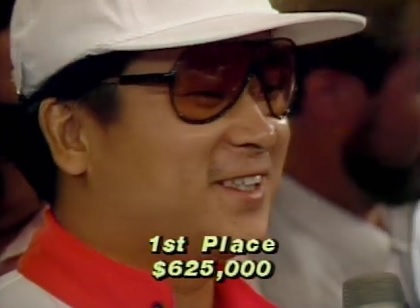 Johnny Fucking Chan! Everyone loves Johnny Chan. Sure, I've given him tons of guff over his low-fi entry into the lucrative energy-drink game, but I could never overlook the achievements of one of the all-time greats of the game. There was a period of time last a little more than a decade when Johnny Chan was the most feared-opponent in poker. At the peak of his powers in the late 80s and early 90s, no one could derail the unstoppable Chan. Over his career, Chan won 10 bracelets at the World Series of Poker, including two wins in the Main Event in 1987 and 1988. Overall, Chan earned in excess of $8.6 million.

It's good to see Chan as the subject of a Pokerography documentary. PokerCentral produced the short 21-minute documentary, which is available to watch for free. That's great news because you do not have to be a PokerGO subscriber to view this cool doc.

“It feels like a miracle,” Chan told reporters after his first WSOP Main Event win in 1987. Chan banked $625,000 for his first-major score. All of you poker history buffs know that Chan won again in 1988 for consecutive victories. Chan earned $700K for his second Main Event score in 1988.

“Chan was an intimidating presence,” said Erik Seidel, who lost heads-up to Chan, which was well-documented in the film Rounders.

Chan was the last player to win the Main Event in back-to-back years. The Main Event attracted fields less than 300 players back in the 1980s. It's safe to say the consecutive feat might never get replicated again in the era where there are 7,000+ runners every year.

Chan almost won a third-consecutive WSOP Main Event in 1989, but his three-peat was thwarted by newcomer Phil Hellmuth. Chan got stopped cold by the Poker Brat, but admitted he didn't bring his A-game that day and would have played several hands differently.

Chan grew up in Hong Kong and later moved to the United States with his family. His parents eventually settled down in Houston, Texas and opened a restaurant. Chan worked in the family business, including waiting on tables. One of his regular customers invited him to an after hours poker game. Chan was still a teenager, but he attended and got hooked. When the restaurant closed, Chan played poker until sunrise. When the game broke, he went to Denny's with the other card slingers that included local doctors and other businessmen. Chan dominated the game and inevitably found himself persona non grata at the game. It was a similar tale that many up-and-coming pros faced when they got too good for their local game and they had to hit the road to find a bigger game. Chan set his sights on Las Vegas.

Chan told a couple uber-degen stories about turning couple hundred bucks into a big score… before losing it all. The legend of Chan begins with one trip to Vegas as a teenager, where he went on a sick rush stating with only a couple hundred bucks. He sat down at the poker table at the Golden Nugget and went on a $30K rush. The Nugget comped him a suite and limo, so long as he played a little in the pits. As expected, the young Chan blew all his winnings before he returned home to Houston.

Chan said that he went to college at the insistence of his parents. Chan erolnled at Houston and took courses in hotel management. He crunched the numbers are realized entry-level jobs in hotel management were approximately $30K a year. Chan knew he could win $30K in a week playing cash games, so he made the obvious choice – he dropped out of college. Chan moved to Vegas and the rest is history.

Chan also talked about how he was approached to appear in the film Rounders. He only agreed to it so his daughter could meet Matt Damon. Ha!!