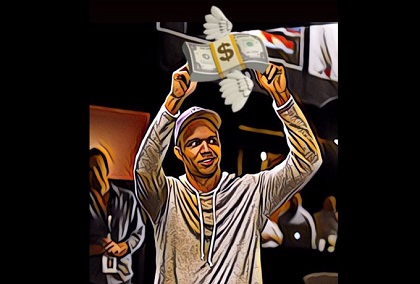 Jungleman did what? Just when you thought it was a dull day in the poker world, news broke this week that Jungleman had backed Phil Ivey in a 2019 World Series of Poker event. Not only did Ivey go deep, he took 8th place for a score worth $124K.

Here's where things get tricky. Jungleman was not the only backer. Illya Trincher was also involved and they had put up Ivey's buy-in in a basic staking deal, legal in the state of Nevada by the way.

So, it seems like an open and shut slam dunk case, right? Not so fast, eh. Trincher and Jungleman are entitled to their half of Ivey's winnings (plus makeup)... except they don't have it. Ivey didn't even put his mitts on any of the cash he won. Why? Because The Man withheld it.

Good luck getting The Man to fork over anything once they got their grips on it, especially a small mound of cash.

So, when/what/how did this happen? If you just got out of prison or woke up from a coma, or just returned for an alien abduction (sorry about the sore chimney from all the probes, mate)... Phil Ivey got caught up in a "edge sorting" scandal with two different casinos. The British courts upheld a ruling by a London Casino, who stiffed Ivey. The Man and the suits and the lawyers at the Borgata saw it as cheating. Ivey and his mysterious companion from China saw it as edge sorting. The Borgata made a crucial error in using cards with easily detectable poor edges and Ivey destroyed them in Baccarat.

The Borgata successfully won legal action and a judge in New Jersey said it was cool for them to garnish Ivey's future wages. He was on the hook for over $10 million after everything got liquidated. Ivey went to the 2019 WSOP and went deep in the $50,000 Poker Players Championship. Ivey missed out on a chance to win the Chip Reese Trophy named after one of his close friends. Even though he took 8th place, the Man swooped in and made sure the winnings went to the Borgata. Heck, they're even lucky that they got anything.

Maybe it seemed like a good idea at the time to back Ivey, but it sort of sucks that there's no specific way for the Rio to pay out backers/stakers. I'm sure that's headaches for all parties involved including paper pushers, bureaucrats, suits, accountants, attorneys, and gaming commission types. Yup, red tape hell. It's simple and easier to give Ivey a big stack of cash and let him cut it up with Jungleman and Trincher, and then let the Borgata grab the rest. All in a paper bag mind you.

Ivey won $26 million in tournaments according to Hendon Mob, which currently places him in the Top 15 at 14th overall. He's won an unspecified amount in cash games and prop betting.

Ivey should just work off his debt for the Borgata. They put him in events and he grinds it out until he wins $10 million. This could be an amazing reality TV show where Ivey lives at the Borgata and plays poker for as long as it takes to win $10 million in tournaments and cash games. Heck, let him even shoot dice for 10 minutes a day as "yard time".

In the past, the IRS confiscated race horses and allowed the horses to run races in order to collect a debt. Of course, Ivey would never agree to grind it out for the Borgata. He's better off doing it on his own and playing in super-secret private cash games funded by crypto currency so the Man and the IRS and the Borgata suits and beancounters cannot track it.