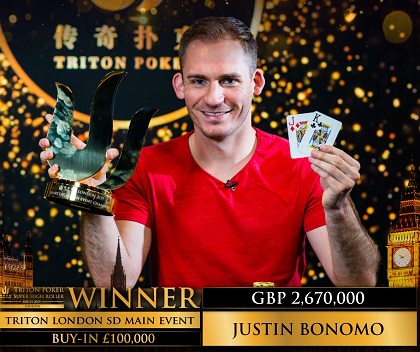 Ship it to ZeeJustin! Just when you thought Bonomo was about to be left in the dust by Bryn Kenney, Justin Bonomo swooped in to win £2,670,000 in local currency or approximately $3.2 million USD. He narrowed Bryn Kenney's overall all-time money lead to seven million instead of $10M.

So… the Triton. This superdupersupreme high roller series has been crushing it the last couple of years. Kudos to Triton for putting on another high baller affair. The Triton London included the Triton Million which raised $2.7 million for A Helping Hand charity. Aaron Zang took down the Triton Million for £13,779,491.

The Short Deck Main Event attracted 108 runners in this £100,000 buy-in event. Only the top 15 places got a cut of the cheesecake with most of the money up top. Over £2.6 million would be set aside to the champ with £1.8 going to the runner up. Overall, the top four would walk away with at least seven figures in USD... and fifth place came close... so very close.

American pro and Ivy Leaguer, Ike Haxton, final tabled the Short Deck but he could not do better than sixth place. He banked £612K for his work, or approximately three-quarters of a million in Yankee bucks.

Paul Phua hit the bricks in fourth place. Phua earned a payday worth £974,500. In USD, that's approximately $1.2 million greenbacks. Not too shabby, eh?

With three to go, ZeeJustin was trying to fend of Liang Xu and Wai Kin Yong. Xu busted in third place, which paid out £1.2 million or approximately $1.47 million USD. Xu's knock out set up the heads-up fight between Bonomo and Yong.

When the dust settled, Yong was picked off in second place and Bonomo had all the chips. For a runner-up finish, Yong took home £1,835,000 or $2.2 million USD. That's a sick score any way you cut it up.

First place paid out £2,670,000 or $3.25 million for Bonomo. He's still second on the all-time money list, but at least he's leaving London with a seven-figure score.