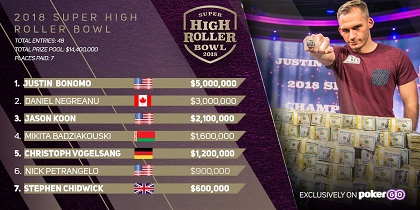 Ship it to ZeeJustin. Justin "ZeeJustin" Bonono earned the biggest single payout of his career with a $5 million score at the 2018 Super High Roller Bowl at the Aria Casino in Las Vegas. The price tag was $300,000. Only 48 players took a shot in this high balla affair. And Bonomo outlasted all of them, including a heads-up bout against Daniel Negreanu. When the dust settled, Negreanu busted in second place and Bonomo got to hoist bricks of cash over his head to celebrate his victory. Bonomo also outlasted a red-hot Jason Koon, who finished in third place.

2018 is a breakout year for the online grinder we used to know as ZeeJustin. The score at the SHRB marks Bonomo's largest cash to date, which eclipsed the $4.8M score he won at the Super High Roller Bowl China in Macau in March. The $5 million win is larger than his best calender year on the tour prior to this season.

Bonomo banked nearly $14M playing live tournaments in 2018. Overall, Bonomo won approximately $32 million according to Hendon Mob, with the bulk of his spoils happening in 2018. And it's just the start of June too! Bonomo earned most of that since March. In terms of most career winnings, Bonomo has moved into third overall (in the world, on the planet), trailing Daniel Negreanu ($39.5M) and Erik Seidel ($34.5M). In case you were wondering, Phil Ivey has dropped to 7th overall now with $26.1M in tournament winnings. Ivey is right behind a semi-retired Fedor Holz ($26.3M) in 6th overall.

Defending champion Christoph Vogelsang made the final table, but he busted in fifth place. The German pro won $6 million for binking the SHR Bowl last year, but he still walked away with $1.2 million for his deep run this year.

The top 5 places at the 2018 SHR Bowl paid out at least seven figures with the top spot getting most of the moolah, or 33.3% of the total $15 million guaranteed prize pool. Only 7 places paid out of 48 total entries (there was a minor save for eighth place). British pro Stevie Chidwick bubbled off the final table in seventh place.

Mikita Badziakouski came into the final table as the chipleader, but he busted in fourth place. ZeeJustin took out Badziakouski. With three to go, Justin held the lead. Could Zee hold off Danny Boy and a sizzling Koon? Ah, Koon busted in third place, which set up the heads-up finale. Koon moved into 17th overall at Hendon Mob for most career money with $19.7M. I'm sure he'll become a "$20 Million Brah" sometime this summer. He only needs 300K in cashes at the WSOP to reach that epic milestone.

Koon has been crushing in 2018 with approximately $9 million in winnings, or more than twice as much as his best career year (2017 at $4.3M). Oh, and May just ended. Yeah, Koon binked $9M in five months including a $3.6M score at the Triton Super High Roller Series in Montenegro. When you're hot... you're hot. Unfortunately for Koon, he ran into the only player who was hotter than him... Bonomo.

Okay, down to the final two. Danny Boy trailed Bonomo 6-1 in chips when the two squared off. The final two didn't battle all the way into the night. Negreanu tried to close the gap early on, but Bonomo opted for a swift kill. Bonomo prevailed in less than an hour of real-time.

Negreanu earned $3 million for second place. The runner-up spoils pushed Negreanu closer to $40M in total winnings. Kid Poker is sitting on $39.5 million and he should pass the $40M marker this summer at the WSOP.

Say what you want about Negreanu, but he's figured out a way to stay competitive in the modern era, especially when the strategic landscape of no-limit hold'em alters every 12-18 months or so.

An American ended the reign of the Germans with a win by Bonomo. Rainer Kempe shipped the 2016 SHR Bowl for $5 million and Christoph Vogelsang won $6 million and the title last May. Bonomo also prevented Vogelsang from winning back-to-back SHR Bowl titles. The Germans were repped at the final table this year when defending champ Vogelsang finished in fifth place. He's won $7.2M in the last two SHR Bowls. Not too shabby, eh?