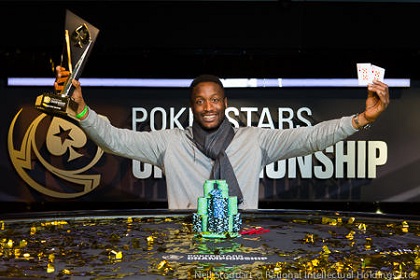 It's a hard way to make an easy living. That's poker, eh? A week ago, 855 souls gathered in Prague for a single mission: win the Main Event. The marquee event at the 2017 PokerStars Championship Prague at the Casino Atrium Prague at the Hilton attracted a €4.1 million prize pool. Everyone at the final table locked up at least six figures. Initially, €775K was set aside for first place.... or 48.4 Bitcoin if you are into cryptocurrency.

Going into the last day of action, Wheeler was right behind Sow for the lead. It appeared those two would end up in an inevitable showdown at high noon. And that's how the script played out. Colin Robinson was the first player to exit the final table, followed by Lodge. Lepore bit the dust in fourth and local boy Mrakes hit the bricks in third.

The two made a money chop with €105K left on the table to the champ. Trailing by 3M in chips at the time, Wheeler definitely got the better of the heads-up deal. However, Sow went on to win the heads-up battle. A boisterous Wheeler locked up €570K for his runner-up performance.

After six days in Prague, Kalidou Sow took down the Main Event. Sow earned a payday worth €675K.