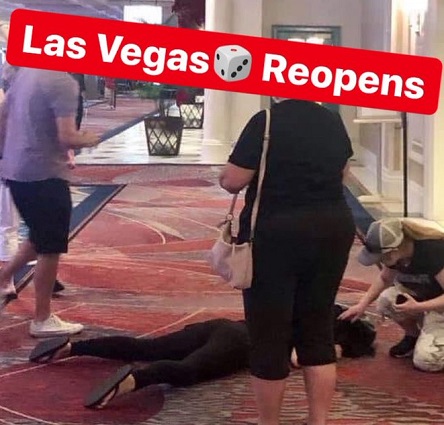 What happens in Vegas, stays in Vegas... except airborne novel coronaviruses. Hey, Vegas is open, but gamble at your own health risk. Vegas has reaped billions of dollars off the poor decision making of others, so it's no surprise to see plenty of gamblers returning to the fray and not giving two flying fucks about safety and cleaning procedures. With rampant unemployment, it's not easy to find jobs out there, but I feel bad for anyone that has to work in a casino environment. They can take all the safety precautions they want at work, at home, and in life, but it takes one infected gambler to become a super spreader and shutter the entire racket.

I guess that's the scenario we're all waiting for. If it doesn't happen, then Vegas will look like its old self by the middle of the summer. Hey, Mayor Goodman got what she wanted. She wanted Vegas casinos to be real-life petri dishes where people infections could spread.

Insert your Jaws memes here ____. It would be weird if a great white shark were terrorizing gamblers on the Strip and one false move and they'd get devoured by the giant shark. But with shark attacks, it's just one person at a time. It's not like the shark attack turns the person into a shark, who then goes around attacking other people.

So, what's up with Vegas? Is it really safe?

It depends on who you talk to. The locals I know have been enjoying Vegas without a monstrous stream of tourists. It feels quaint to have the Strip to yourself without sharing it with a bunch of slow moving bovines gawking for selfies, or dodging projectile vomit from shithoused Chad frat daddies and White Claw Drenched and THC-Gummy'd Up Beckys. But what happens when the masse return in full force? Disaster looms. It's like were in the middle of the first act of a horror film. Don't forget, "Contagion" started off in a casino. Just make sure you wash your hands after you handle chips.

The Venetian was one of the first casinos to open. The Excalibur is open. Yes, the castle is still standing! The MGM, Bellagio, and New York-New York also reopened last week.

"Our guests are having a great time and are thrilled to be back in the city they love," said MGM CEO Bill Hornbuckle. "We are eager to get more of our employees back to work and enhance the Las Vegas experience with additional resorts."

Aria and Mandalay Bay will have their grand reopenings on July 1.

In downtown Las Vegas, the Golden Nugget and The D reopened.

More openings are coming. The Luxor will open its doors in two weekends. No word yet on Planet Ho, Paris, Mirage, Park MGM, Bally's, Rio, or Cromwell. But stay tuned.

So, how about live poker? You have limited options, but at least there's some action in Sin City.

The Orleans, South Point, and Venetian were the first three poker rooms to reopen at four-handed tables, albeit with smaller-sized cash games. The old days of full-ring (10!) games are long gone. Some casinos in Florida are six-handed and seven-handed (eek, gad!). But Vegas is ticking with four-handed action for now.