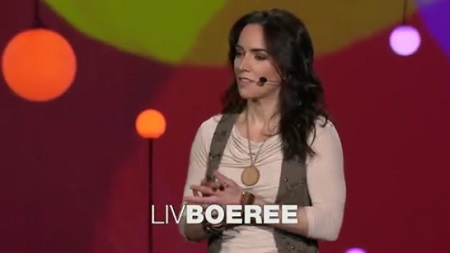 Live Boeree is a legit rocket scientist. She's the smartest cookie in the jar and one of the most elegant lecturers in the poker world. It's no coincidence that Liv Boeree was tapped to delivered a Ted Talk. She was good at it, they asked her back for a second one.

The interwebs are buzzing about Liv's latest lecture. In the most-recently released video by Ted Talks, Liv gave a lecture about three important things poker taught her about normal every day living. She focused on luck, quantitative thinking, and intuition.

Liv is a poker player so she knows that luck is a bigger factor than we'd like to admit because poker players love to brag about their mad skills at the tables. But Liv isn't about to chalk up her success to all skill.

"Like poker, life is also a game of skill and luck," said Boeree. "When it comes to the biggest things we care about... health, wealth and relationships... these outcomes don't only depend on the quality of our decision-making, but also the roll of life's dice. For example, we can be perfectly health-conscious and still get unlucky with something like cancer."

Boeree used her own life as evidence. Back in 2010 she shipped an event on the EPT, but it actually ended up being a bad thing because she overestimated her abilities.

It's funny how even the most humble players will be affected by a big win. Part of running good in poker is being super confident at the tables with your reads and decisions, but sometimes a big score will negatively affect that aspect of your game.

"I'd only been playing full-time for about a year, when I won, I assumed I must be rather brilliant," explained Boeree. "I thought I was so brilliant that I not only got rather lazy with studying the game, but I also got more risky, started playing in the biggest tournaments I could against the very best in the world. And then my profit graph went from a thing of beauty to something kind of sad, with this worrying downhill trend for a long time, until I finally realized that I was overestimating my skill level."

At least Boeree realized what was happening before it was too late. It was a classic trap that so many beginner tournament players and relatively new pros make.

Boeree equated it to the current situation in cryptocurrency. When prices were going through the roof any idiot could make money without a real trading system in place. And then the bottom fell out and it left investors scrambling. Only the traders with real strategies were able to recover, while the sheep got slaughtered.

Boeree stressed the second point of the importance of quantifying thinking. Instead of just thinking about someone bluffing, she wanted to put an actual number on it. Or in general terms, when a friend asked if you were going to hang out later, instead of saying probably, Boeree would give a numerical answer... which she actually took the time to figure out. Boeree said it really helped with the planning process for many things in life.

The third thing Boeree discussed was intuition. "While we shouldn't ignore our intuitions, we shouldn't overprivilege them either."

Boeree flashed a couple of those hippie-dippie inspirational quotes about trustng your gut and letting the universe make snap-calls for you in life. Now that sounds great at something like Burning Man, but it will get you destroyed at the tables if you make decisions on a whim. Sure, there's something to be said about gut instincts, but there's so much that can go wrong in that space due to uncontrollable biases.

Boeree ended her lecture with a poker meme: "The future is unknown, but you can damn well try and estimate it."