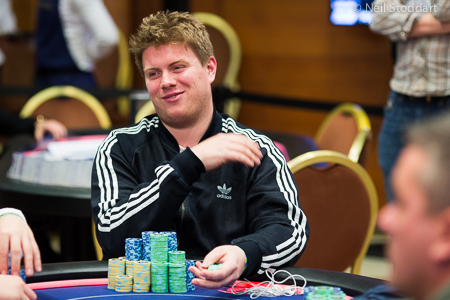 It was another late night in Prague.

Originally, the EPT Prague €5,300 buy-in Main Event was scheduled to play down to 18 players and the final three tables. Alas, on Day 4 the action progressed much slower than expected, so play was suspended with 23 players remaining. The original intent for Day 5 was to play down from 18 to 6.

Marc Macdonnell from Ireland ended Day 4 as the chip leader with 3.6M. Russia's Gleb Tremzin was not far behind with 3.5M.

Action on Day 5 picked up with a couple of eliminations. At press time, there are 18 players remaining on the final three tables and all three French players are still alive.

Follow along with the action with live updates from PokerStars Blog.