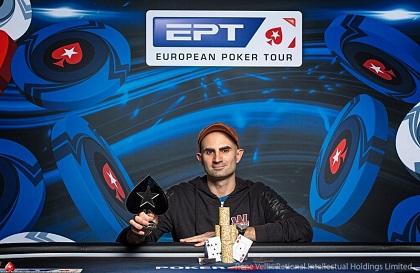 The European Poker Tour reached the end of their season with the EPT Grand Finale at the Monte Carlo Casino in swanky Monte Carlo. Even the stray dogs drive Bentleys in Monte Carlo, where wealth is a mere afterthought because when you're so stinking rich, you don't care about overpriced things. Of course, that mentality is perfect for outside sharks look to feast on the uber-rich. That's why the convergence of the poker world and the uppercrust always makes a unique experience. Love it, or hate it... the EPT Monte Carlo is truly a high-balla visceral experience any way you cut it.

Only nine players were paid out in Event #2, but he outlasted a difficult final table that included Erik Seidel, Charlie Carrel, Seth Davies, Ole Schemion, and Joao Vieira. Seidel busted in fifth place, while Carrel hit the road in fourth overall. Loosli defeated Georgios Kitsios heads-up for the victory.

Spanish pro Sergio Aido is the third-most successful player in the history of his country. Aido won the €100,000 Super High Roller by fading a field of 52 entries, which includes 18 re-entries in this SHR affair. That event had a 5 million prize pool and only seven players were paid out.

Canadian pro Timothy Adams binked the single-day 25K High Roller. That event paid out €548,030. The 25K attracted 82 runners including 26 re-entries. The total prize pool fell short of 2M. Only the top 11 places paid out in that one.

Lots of familiar faces cashed in the 25K including Matthis Eibinger, Ole Schemion, Ike Haxton, Alex Foxen, Charrlie Carrel, and Sean Winter. Carrel took fourth place and made yet another final table. Canada beat out America in this one and Sean Winter finished in second place after losing heads-up to Tim Adams. Winter took home €390K for a runner-up prize. Not too shabby, eh?

Oh, and in case you were wondering, an Italian player won the French National Championship. The €1,100 buy-in National attracted 1,425 runners and a prize pool worth €1,382,250. Stefano Schiano beat Aussie Sam Higgs heads-up for the National title and €209,000 in cash.