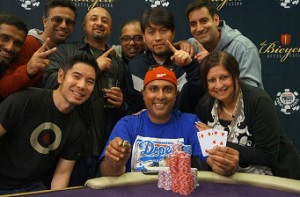 Dr. Nikhil Gera ships the Main Event at the Bike

Pretty much everyone I know in poker is in desperate need of a shrink! But at the 2016 WSOP Circuit event at the Bicycle Casino in Bell Gardens, California (just outside the L.A. city limits), an actual head shrinker took down the $1,675 buy-in main event. Dr. Nikhil Gera outlasted a field of 842 runners to win his first-ever WSOP Circuit ring. First place eared the good doctor a pay day worth over $246K.

Dr. Nikhil Gera from Los Angeles is not a full-time poker player, but his job gives him plenty of flexibility and lots of time to play poker. He faded a difficult final table that included Eddy Sabat, Ankush Mandavia, and Tuan Le. Paul Nguyen went into the final day with a massive chip lead. Nguyen got heads-up with Gera and the two slugged it out in a memorable heads-up battle. The rail was loud and festive with both players attracting a slew of locals cheering them on. When the dust settled, Dr. Gera emerged the champion.