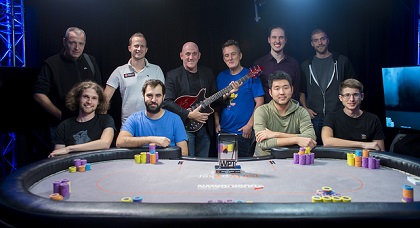 The Devilfish was one of the first big stars in televised poker. Don't forget, hole card cameras appeared on late-night British TV way before the poker boom took root in America. Alas, Dave ‘Devilfish' Ulliot is gone, but not forgotten. The cagey British pro passed away in April 2015 after a losing bout with cancer. The WPT's UK Festival £5,300 High Roller event was rebranded as the Devilfish Cup. This special event attracted pros from all over the world, who flew out specifically to pay respects to the legendary Devilfish. The event attracted 161 original entries and 43 additional re-entries for a total prize pool worth a bit over £1 million.

Luis Blanco Oliver shipped the first-place prize of £250,000 plus a special autographed guitar by Brian May, the guitarist and one of the original members of the rock group Queen.

Watch the entire final table of the Devilfish Cup here…