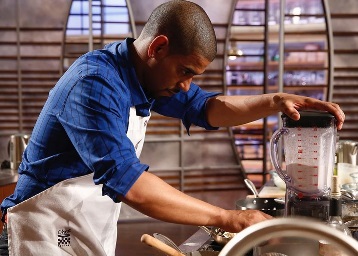 This week's episode of MasterChef titled "The Good, The Bad, and The Offal" featured a crazy twist! Instead of one home cooks, two of them were up for elimination…except they did not know about the double elimination until the final judging. This week's MasterChef began with 14 home cooks and by the end of episode 8, only 12 home chefs remained. Poker pro David Williams survived the special double elimination this week and he advanced to the final 12.

Ed Lee (from Top Chef fame) was this week's special guest judge. Chef Lee introduced this week's Mystery Box Challenge. The home chefs opened their boxes to discover a new $20 bill. The final 14 had to feed family of four on just $20. The winner would get their recipe published in Family Circle Magazine. The home cooks had only 45 minutes to complete the challenge. To sweeten the pot and add an element of pressure, Chef Lee also joined the challenged and whipped up a dish under $20.

Which home cook could do the best while cooking on a budget? Chef Lee crushed everyone with his special shrimp curry dish.

The Top 3 in the Mystery Box Challenge included Sean, Brandi, and Eric. Sean the DJ from Vegas impressed Chef Gordon Ramsay with Trout Amandine with Wax Beans and Fish Broth. Brandi from Kentucky only needed $19 to complete her classic Southern dish of Seared Chicken Thighs and Fried Green Tomatoes. She's a mother who had plenty of experience working on a budget, so she easily cruised into to the top three. Eric the fireman also knew how to stretch a budget because he cooked for the guys at the firehouse back in NYC. He also whipped up a dish that only cost $19... Stuffed Chicken Breast and Spinach Pesto.

Sean selected sweetbreads (a.k.a. cow pancreas) for David Williams. We did not see Williams' pancreas dish. He was not selected in the top 2, but he wasn't among the bottom three.either. He did not get any face time this episode (unlike the last episode when he was featured), but his lack of screen time meant he would avoid the chopping block. 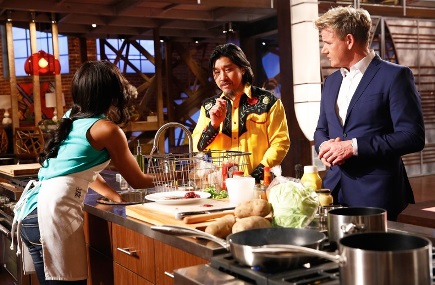 Chef Ed Lee was this week's guest judge on MasterChef

The best of the best dishes in the elimination challenge included Eric the Fireman and Katie from Mississippi. The judges loved Eric's Chicken Feet Madeira with Snap Peas and Mashed Potatoes. Katie blew the judges away with a Lamb Kidney Curry.

The worst dishes in the elimination challenge included... D'Andre, Alejandro, and Diana. D'Andre burned part of his dish, but his Braised Lamb Tongue dish was so hideous that both Chef Ramsay and himself spit out his inedible lamb tongue. Chef Ramsay called it a "dog chew." Diana made a "catastrophic mistake" according to Chef Ramsay. She failed to properly cook Tripe Menudo with Corn and Jalapeños. She cut the tripe up into little pieces, which was her downfall. Alejandro whiffed in his attempt to deliver a comptent dish of Chicken Oysters with Plantains and Mango Guacamole. The judges were not impressed with his bland dish.

During the final judging, Alejandro was given another chance by the judges. He knew he faded this dangerous double elimination and called his near miss a "wake up call." As bad as D'Andre's dish was, Diana's was the worst. She was eliminated and sent home. D'Andre thought he dodged a bullet, however, there was a major twist in this episode. The judges revealed they this challenge was actually a secret double elimination! Therefore, two home chefs were eliminated this week, so both D'Andre and Diana were dunzo.

That meant 12 chefs are still alive and not 13. David Williams survived the double-elimination challenge and he's is now among the final 12 home cooks. Can he keep it going and advance another week in MasterChef? Tune in next week to find out.