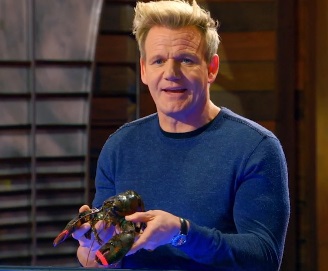 It was Lobster Day on MasterChef! David Williams passed the speed skills challenge with a poached lobster.

Lobster Day on MasterChef. For Episode 6 of MasterChef, could the final 16 cook a lobster and survive the initial speed skills challenge? Chef Ramsay's culinary skills were on display for everyone. Chef Ramsay humanely killed and poached a lobster (in just two minutes), then demonstratedhow to properly extract maximum lobster meat from the shell. After the tutorial, it was time for the final 16 home cooks to choose their lobster and replicate the feat... in only 20 minutes.

Who would take apart the lobster in proper fashion? Anyone who passed this challenge would be deemed safe and moved up to the balcony as they automatically advanced to the next round. Anyone with a bad lobster would have to face off in the elimination challenge.

Chef Ramsay thought only a handful of home cooks would pass his speed skills lobster challenge, however, a vast majority pulled off the feat when 11 out of the 16 home cooks advanced.

The five home cooks (Eric, Andrea, Lisa-Ann, Diana, and Nathan) who failed the speed skills challenge had to fight to the death... by cooking more lobster.The loser would bust out and the other four would advance to the final 15.

The elimination challenge entailed the five home cooks to prepare Chef Ramsay's signature dish... Lobster Tortellini in a Seafood Broth. He gave them a quick tutorial on how to make the dish, including making pasta from scratch and twisting the tortellini. Then they had 45 minutes to replicate his lobster tortellini and special broth.

The Pastor's son, Nathan, looked doomed. His dish didn't look so hot and he said he needed a miracle to survive. Despite how bad his pasta looked, he had a "dynamite broth." Eric the Fireman easily passed along with Andrea, one of the youngest contestants still remaining.

It came down to two bad dishes between Diana and Lisa-Ann. Diana served a dish that

“tasted terrible.” Lisa-Ann also had a bad dish, which was disappointing because she is Sicilian and cooked pasta at home for her family all the time. When it came down to it... Lisa-Ann was the one with the worst seafood broth and lobster tortellini. Lisa-Ann was eliminated in 16th place.

With 15 home cooks remaining...David Williams is still alive on MasterChef.