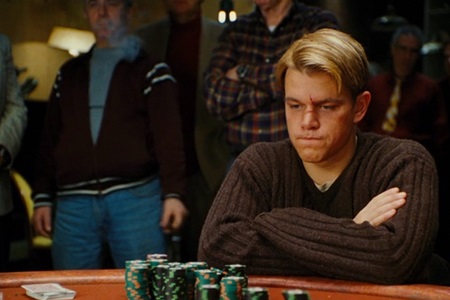 When Matt Damon filmed Rounders, he was a relatively unknown actor on the verge of striking it big. Today's he's one of Hollywood's biggest stars. Damon appeared on the latest episode of the Bill Simmons podcast and discussed Damon's journey through Hollywood. Damon also told the story about how Doyle Brunson knocked him out of the WSOP.

Simmons and Damon riffed on a series of topics specifically two films at length including Rounders and Good Will Hunting.

Good Will Hunting put Matt Damon on the map. It also won him an Oscar for best original screenplay. Damon shared co-writing duties with Ben Affleck. The big joke in Hollywood was that Damon really wrote the screenplay, and it was Affleck who added a few jokes.

Damon's next films for Miramax after Good Will Hunting was Rounders. The relatively low-frills drama for Miramax ($12 million budget) didn't do that well at the box office. It was yanked after a couple of weeks of theatrical release. The studio wanted to protect its potential big stars, particularly Matt Damon.

Check out this Oral History of Rounders that the Ringer ran couple weeks ago to commemorate the 20th anniversary of the release of Rounders.

Damon tells a quick story about the only time he played in a World Series of Poker event at Binion's. Miramax bought in Damon and Ed Norton into the 1998 WSOP Main Event as a promo campaign for Rounders. Damon sat at the same table as Doyle Brunson. He wanted to “last to the piss break” and played tight. Damon woke up with pocket Kings. He got it all in against Texas Dolly, who tabled pocket Aces. Kings were no good for Damon and his WSOP Main Event was over. At least he had a good story and got knocked out by a legend.

Listen to the entire Simmons podcast below, or forward to the 47-minue mark where the segment on Rounders begins...