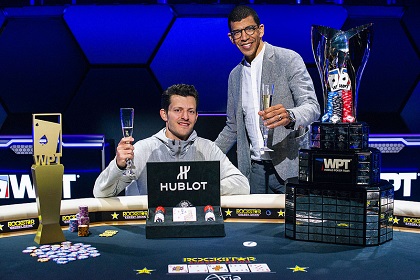 Ship it to Waxman! Matt Waxman took down the 2018 World Poker Tour Tournament of Champions at the Aria Casino in Las Vegas. On Season X of the WPT, Waxman won an event in Paris at the WPT Grand Prix de Paris. And now you can add another milestone to Waxman's resume, who currently has over $4 million in career tournament earnings.

It's been a long year grinding on the international circuit. After circling the globe and hitting up all the hotspots in North America and elsewhere, the World Poker Tour hosted its season-ending championship event called the Tournament of Champions. No smoke and mirrors with this branding. Everyone in the TOC had previously won a WPT event. Some of them won more than one. Not too man soft spots in a difficult field of 80 former WPT champions.

We finally reached the end of WPT Season XVI a.k.a. Season 16 of the World Poker Tour. During the start of the poker boom, the grand finale was dubbed the WPT Championship and hosted at the Bellagio with a $25K price tag. That buy-in had a little more oomph to it compared to the typical $10K buy-ins on the tour. In the modern era, the season-ending event was re-branded as the Tournament of Champions. This exclusive event was open to previous champions in any WPT event over the last 16 years. Any players who won an event on the current tour was awarded a freeroll to the $15,000 buy-in Tournament of Champions.

The WPT added some money to the pot to entice more champions to take a shot. The field was a legit who's who of poker along with a few of those "Wow! Whatever happened to ____?"

The final table at the 2018 WPT TOC included four-time champion Darren Elias, who was fresh off his win last week at the inaugural WPT Bobby Baldwin Classic at the Aria. Also at the final table were Nam Le, Nick Schulman, Matas Cimbolas, J.C. Tran, and David Benyamine.

Elias came into the final table with a substantial chiplead, however, he took a wicked bad beat when it was three-handed. Classic cooler. Jacks versus Queens. Elias' Queens were run down by Waxman's Jacks. Waxman turned a Jack-high straight to win the pot and mortally wound Elias. Elias would bust in third place, which set up a final battle between Waxman and Matas Cimbolas.

Matas Cimbolas couldn't pull off the win and he settled on a runner-up finish, which paid out $265K. Waxman banked over $463K for his win, plus a bunch of balla schwag from the WPT corporate sponsors.