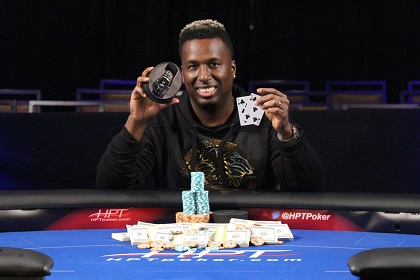 Ship it to Maurice Hawkins! The 11-time WSOP Circuit ring winner put his grinding skills on display once again. Hawkins has a knack for these regional events all over America. He's dominated the WSOP Circuit over the last decade, so it was not a surprise to see him take down another event on the Heartland Poker Tour.

The Ameristar Casino St. Charles is the hotspot for poker in the St. Louis area. The Ameristar hosted the latest stop on the Heartland Poker Tour, which focuses events spread out across America in non-traditional gaming spots (e.g. outside of Vegas, AC, and Reno).

The HPT at St. Charles included a full series of events. The Main Event featured a $1,650 price tag. A total of 347 hopefuls took a shot at the coveted HPT title and a six-figure payout.

The prize pool for HPT St. Charles fell short of a half million with a total of $492,740. Only the top 36 places paid out with the bulk of the winnings set aside to the champion.

With two to go, Hawkins had the edge. After all he was a true closer and won 11 events on the WSOP Circuit. He had enough rings for every finger and one left over. Even some of the premier pros in the world lack the proper finishing skill to consistently win tournaments. It takes tremendous skill to go deep in tournaments and consistently final table an event. However, it's a whole other crazy beast to win a tournament. Somehow, Hawkins tamed that beast. After all, he had lots of practice grinding out final tables and victories on the WSOP Circuit.

Harry Sablotny put up a good fight but he had to settle on second place. Harry Sablotny banked nearly $72K for a runner-up share. Not too shabby, eh?

Maurice Hawkins studied biology and chemistry in college and had eyes on a medical career. However, poker is way more fun than med school! His career earnings are somewhere around $3.2M. Considering he's never really had only one score in excess of $250K, Hawkins is a true Joey Knish. The consummate grinder. Ship it to Hawkins once again.