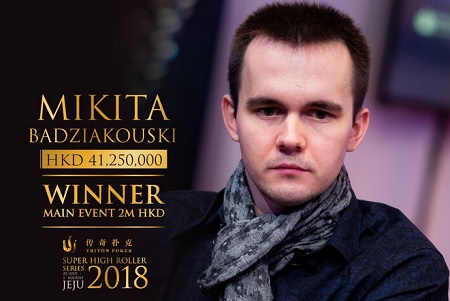 Back-to-back Badz Man! The Triton High Roller Series in Jeju ended with a bang. Mikita Badziakouski won the HK$2,000,000 buy-in Main Event for HK$41,250,000, or approximately $5.2 million in USD. That marked back-to-back wins for Mikita Badziakouski, who previously shipped the Main Event in Montenegro for $2.5M just before the start of the WSOP. When you're hot... you're hot.

The buy-in for the Main Event was HK$4,000,000 or approximately $255K USD. The total prize pool topped $14M USD with only six players earning money and the winner walking away with $5.2M.

This High Roller Series produced big-time payouts. I mean... $5.2 for first place is a sick score anyway you cut it. The top 5 places paid out at least seven figures in USD. The lowest payout was a shade under $827K.

Sergio Adio was the first player to bust among the final six. For the "min-cash", the Spanish pro Aido earned nearly $827K.

Jason Koon walked away with a cool million for fifth place. The American has been crushing the circuit this year with over $11 million in cashes. His total number is somewhere around $22M, so Koon has won more than 50% of his total earnings in the first seven months of the year. In the last 18 months, Koon won over $15M in various high roller events. Koon went into the 2018 WSOP red-hot, final tabled a couple events at the Rio, and left Vegas with his run good still intact. Koon final tabled two events in Jeju. Sure, he didn't win the Triton Main Event, but he still banked another seven-figure cash.

Sam Greenwood also went deep in another high roller. The Canadian took down $1.4M for fourth. Richard Yong scored $2.1M for third place. His bustout set up a heads-up match between Badziakouski and Chan Wai Leong.

Leong couldn't prevent another win for Badz Man. Leong walked away with $3.2M, which is not too shabby of a consolation prize.