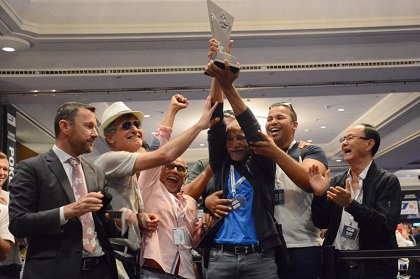 Mikita Badziakouski has been on a sick run. Devastating. Smoking. A heater of epic proportions. Badziakouski took down back-to-back Triton SHR events (in Montenegro and Jeju, South Korea). Badziakouski won over $10M in 2018... and that was only at the start of August. You can add another seven-figure score to his resume with a €1.65 million win in Barcelona.

Mikita Badziakouski outlasted a field of 54 runners at the 2018 EPT Barcelona €100K Super High Roller. The event attracted the usual cast of characters (sharks and wealthy businessmen alike) you'd expect to see at a high-stakes event.

Only the final seven paid out with the majority o the cheesecake going to the champion.

Ahadpur Khangah's runner-up finish was worth a heady payday worth €1,191,900. Not too shabby, eh?

Mikita Badziakouski did it again. The Belarussian shipped the SHR and a first-place windfall worth a tick above €1.65 million.

Jean-Rene Fontaine also won a Platinum Pass to the 2019 PSPC in the Bahamas.