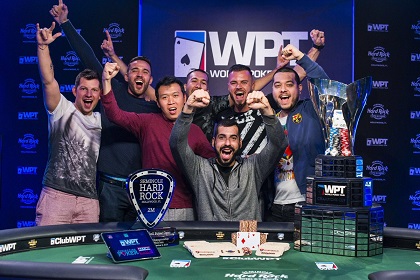 When you're hot, you're hot. When you're running good, no one can stop you. Sometimes it's just one of those days when the poker gods bless you with “Terminator Mode” and absolutely obliterate everyone in your path. The best time to unlock Terminator Mode is at the final table of a big tournament.

On an ordinary Wednesday in South Florida, Milen Stefnov went into full-blown Terminator Mode and not one at the Seminole Hard Rock Casino in Hollywood, Florida could stop him. Stefanov knocked out all five opponents at the final table of the 2019 WPT Seminole Rock 'N' Roll Poker Open to go wire-to-wire and take down his first World Poker Tour title.

Milen Stefanov bagged up the lead at the end of Day 4 with a tad under 9M. Roman Korenev was second with 8.1M. Cesar Fuentes and Dave Novosel both had approximately 7.5M. Germany's Fabian Gumz had 5.1M and he came into the final table fifth overall out of six. Francis Anderson was the shorty with almost 2.2M.

The final table lost a player within the first orbit. It only took four hands before Francis Anderson got it all in with

against Milan Stefanov's pocket sevens. Anderson took the lead when the Queen of hearts spiked on the turn, but Stefanov regained the lead when he rivered a set of sevens. Ouch, bruh. Francis Anderson became the first player to exit the final table. He banked almost $112K for his diligent work.

Cesar Fuentes hit the bricks when his Queen-ten lost to Milen Stefanov's Big Slick. Stefanov flopped an Ace, but Fuentes turned a Broadway gutshot. He whiffed on the river and busted in fifth place.

Roman Korenev got it all-in with

against Stefanov's pocket Aces. The pocket rockets held up and Korenev bounced in fourth place.

Five hands later on Hand #81, David Novosel hit the road when he missed a flush but made a big call with a bluff catching pair of sixes. Milen Stefanov actually flopped two pair and turned a boat with

When the heads-up play commenced, Fabian Gumz trailed by over 5 to 1 with 6.2M compared to Stefanov's 33.2M mountain of a stack. Gumz gave Stefanov a good fight.

After 50 hands of heads-up play, Stefanov finally put away Gumz. Stefanov clinched the tournament with Ace-two against good ole Queen-eight. Stefanov flopped an Ace, but Gumz turned a Queen to make things interesting. Alas, he could not pair the Ocho or river trip Queens. Stefanov's pair of Aces held up and he won the hand and tournament.

Gumz busted in second place and banked $353,380 for a runner-up finish. That's a heady score any way you look at it.

Stefanov shipped the WPT Seminole Rock N Roll Open for a hefty booty worth $545,070. He also earned a freeroll (valued at $15,000) into the season-ending Tournament of Champions, which will be played out at the end of the WPT season at the Aria Casino in Las Vegas sometime around Memorial Day weekend.

Stefanov had approximately $129K in cashes before his final table appearance in Hollywood. His previous biggest cash to date occurred at the end of the summer with a final table cameo at the Campeonato de Espana de Poker in Barcelona.