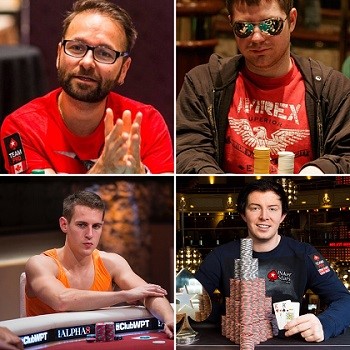 Another week and another batch of fresh content from Daniel Negreanu. Danny Boy has been busy in 2017. He recently finished playing at the 25K High Roller at the Aria in Vegas, but he still had time to find to post a couple of videos and a brand new podcast. The Full Contact Poker Podcast featured three guests this week to discuss hands and other things. Negreanu invited fellow Canadian Timex to join him, along with British pro Jake Cody and American pro Jonathan Little.

Last week on his YouTube channel, Negreanu posted a vlog about his high rolling hijinks at the $25K at the Aria. In his two newest videos, Negreanu offers up a hand breakdown and a poker tip. Negreanu's latest breakdown vid featured a hand at the 2016 High Roller Bowl. The hand in question did not involve Danny Boy. Instead, the hand featured Fedor Holz vs. Dan Shak. Holz woke up with pocket Queens and Shak called with J-10 from the big blind. Great breakdown by Negreanu between one of the premier young guns against gold futures trader and high stakes reg Dan Shak.

For the Tip of the Week video, Negreanu discussed bet sizing and specifically, “How much should you raise?” This is a good topic for both newbies and intermediate players…

Just when you think Negreanu has worn himself out with his weekly video project, he found time to sit down for another episode of the Full Contact Poker Podcast. Negreanu had not one, but three groovy guests this week with some “high-level analysis” for Episode 11. Danny Boy sat down with British pro Jake Cody, who is currently playing mid-stakes cash games in Macau. Cody delves into how he created his own video channel and they discuss a couple of hands. Negreanu also chatted with fellow Canuck Timex about his newest business Poker Shares. He also chatted with Jonathan Little about his coaching business.