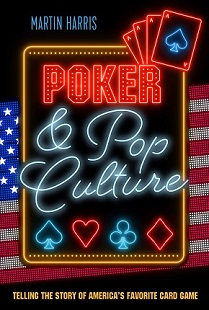 New book on poker and pop culture by Martin Harris

Poker books have always been the backbone of poker fanaticism. Whether it's strategy or non-fiction, books are a common staple in the lives of poker aficionados. I know plenty of poker players who have never read a book in their life... aside from a couple poker books, like Super/System.

Poker books are so cool that I even wrote one. It took me nearly five years, but I wanted to join a special club of poker authors that expressed their love of the game in the form of a manuscript. Poker and the written word have had a symbiotic relationship since Sir Hoyle printed his first book of card game rules.

Greg 'Fossilman' Raymer revealed he has a poker book ready to roll next year. Raymer penned Fossilman's Winning Tournament Strategies. The publish date will be during the 2019 World Series of Poker. Good timing eh?

Greg Raymer made a household name for himself for winning the Main Event the year after Chris Moneymaker. Fossilman, his fossil card-capper, and his reflective sunglasses became the primary storyline for the 2004 WSOP coverage on ESPN. Fossilman, a patent attorney from Connecticut, went on to win the largest Main Event in history (at the time with 2,576) and a $5 million score. Fossilman became a pitchman for PokerStars during the height of the poker boom.

Fossilman tried his hardest to prove his run in 2004 was no fluke. Fossilman followed up his win with a 25th place finish at the 2005 WSOP Main Event. Fossilman made the final three tables, but busted on the penultimate day of the Main Event. The 2005 Main Event, won by Aussie Joe Hachem, attracted 5,619 (also a record at the time), or twice as big as the previous year.

Fossilman won two events on the Heartland Poker Tour in 2012, but he cashed for 100K in a full year only once since then.

D+B Poker will also be publishing a book by Martin Harris titled Poker and Popular Culture: Telling the Story of America's Favorite Card Game. Harris, a college professor from North Carolina, covered the poker scene for over a decade as a tournament reporter and journalist. Harris taught a university class called Poker and American Film and Culture. He was kind enough to include Lost Vegas in the syllabus and for a specific class discussion.

Harris also created the popular poker blog Hard-Boiled Poker. Harris explained his book idea on his blog: "Ordered somewhat chronologically as a history of the game, the book primarily will focus on poker's prominence in American popular culture or the “mainstream.” In other words, I'll be examining the game as it has been discussed and portrayed over the last two centuries-plus not just at the tables, but in newspapers, magazines, letters, memoirs, paintings, fiction, drama, radio shows, music, film, television, and elsewhere.

The book will additionally highlight poker being frequently evoked in politics, business, economics, warfare and diplomacy, business, economics, sports, and other “non-poker” contexts, with all of those references furthering the argument for poker's importance to U.S. history and culture."

D+B Poker published one book this year titled The Pursuit of Poker Success by Lance Bradley. Poker Success pinpointed the winning keys and fundamentals of the 50 of the best poker players in the world. D+B has other books forthcoming including strategy books by Alexander Fitzgerald and David Macklin, plus Modern Poker Theory by Mike Acevedo and A Girl's Guide to Poker by Amanda Botfeld.

Poker books are cool again! I hope the D+B Poker crew hits me up, because I have a couple of ideas.

Check out our recommendations for poker books.