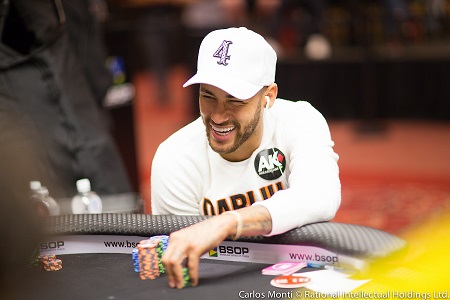 Who says athletes suck at poker? Take a look at Neymar Jr. The Brazilian superstar crushed the tables at the 2018 Brazilian Series of Poker (BSOP) in São Paulo. Neymar took a shot at the High Roller and managed to final table the sucker. he couldn't go all the way, but managed a sixth-place finish much to delight of Brazilians and football fans across the globe.

Neymar Jr. is most known for his skills on the Brazilian national team, while his day job is playing forward for Paris Saint-Germain. Neymar Jr. had 2 goals and an assist in the World Cup this year. In France's Ligue 1, Neymar scored 19 goals (and 13 assists) in 20 matches over the previous season. In the Champions League, Neymar Jr. scored 6 times in 7 matches.

Neymar Jr. advanced to the final table with nine players remaining. He asked everyone if it was cool if he bounced to attend a wedding. After all, he was the best man and couldn't skip it. Everyone at the table agreed to postpone the final table until Neymar's schedule allowed him to return. The tournament director sent the table on a break.

According to PokerStars PR, "Fans and friends showed up at the tournament room to root for Neymar Jr who was welcoming throughout, taking pictures and signing autographs. When the players made the decision, BSOP generously agreed to cover additional expenses, including hotel rooms and flight changes."

When action was paused, Neymar Jr. was sixth overall in chips.

Neymar Jr. couldn't get any momentum going and he busted in sixth place. The live stream attracted a record number of viewers. Everyone wanted to see their hero take down an event on the BSOP, particularly the High Roller. Over 16,400 people tuned in to watch the live stream. As of press time, the stream has nearly 220K views.

Neymar Jr. busted with an unfortunate flush over flush. Ah, flushed out.

The final two made a heads-up deal. When the dust settled, Oscar Alanche busted in second place and took home R$250,000. Meanwhile, Affif Prado shipped the High Roller for a score worth R$317,800, or approximately $85K.