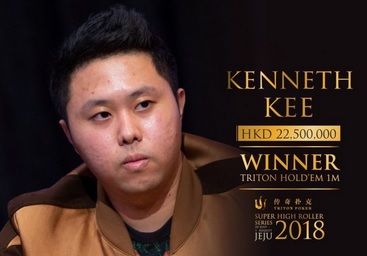 These days, there's no shortage of high roller events even in the down time immediately after the WSOP. High ballas didn't waste any time flocking to the next destination on the big money circuit. This summer, Korea was the place to be for high stakes poker with the 2018 Triton Super High Roller Series Jeju. Some of the biggest names on the high roller scene were in the mix including everyone's favorite GOAT, Phil Ivey.

There was a time not too long ago when the month after the WSOP was a dead zone for poker. Everyone was recovering from WSOP fatigue, or trying to rebuild their bankroll after a wild summer in Las Vegas. Seemed like late July and August were mellow before the tours picked up again in L.A. with the Legends of Poker and the EPT resumed with their annual stop in Barcelona at the end of the summer.

The folks at Triton Poker saw an open spot and went for it, adding Jeju as the latest stop of their Super High Roller Series.

The swanky Landing Casino Jeju in South Korea became the epicenter for high-stakes poker over the last week or so. Five special events were on the docket for this series (using Hong Kong Dollars as the buy-in currency). The HK$1M Main Event kicked off, while four other events played down to a champion. Those events varied and included HK$100 Short Deck, HK$500K Short Deck, HK$500K 6-Max, and HK$1,000,000 Short Deck.

Nick Schulman, Ivan Leow, David Peters, and Kenneth Kee etched their names in the history books as the latest Triton SHR champions. Leow had a special run with three cashes, while Kee won and event and finished second in another, which he lost a heads-up battle against Nick Shulman in the opening event.

Schulman picked off Ken Kee from Singapore heads-up for the title. Kee banked HK$1.3M or $168K USD for his run.

In the second (Short Deck) event on the schedule, Tom Dwan went deep and cashed... but he couldn't go all the way. Tough Final table too with Rui Caso and Jason Koon. Dwan settled on a fifth-place finish. The eventual champion, Ivan Leow mentioned that Dwan is the toughest competitor at the final table.

Going into the 2018 WSOP, Koon was the hottest player not named Justin Bonomo. Koon's run good continued with a final table appearance in HK$500K Short Deck. Koon finished in third place, for a score worth HK$3.6M, or approximately $463K USD.

Ivan Leow from Malaysia went deep in the first event and cashed, despite his limited experience with Short Deck tournaments. Leow made back-to-back final tables with another deep run in the second event. Despite Koon and Dwan lurking at the final table, Leow went all the way.

France's Rui Cao finished in second place after losing a heads-up bout to Leow. Cao banked HK$5.2M, or approximately $673K USD. Not too shabby for a runner-up score, eh?

Only the top 4 places paid out in the 6-Max event. A total of 39 runners took a shot at this high balla affair. Stacked final table too which included Bryn Kenney and Luc Greenwood. Both did not cash, with Greenwood bubbling the money in fifth place.

The final four included David Peters, Stevie Chidwick, Steve O'Dwyer, and Chow Hing Yaung. Yuang final tabled and cashed in the first event and this marked his second cash of the series.

Chow Hing Yaung was picked off in fourth place. Stevie Chidwick followed in third place. That set up a heads-up bout between O'Dwyer and Peters.

When the dust settled, Peters won the heavyweight bout. O'Dwyer had to settle on a second-place score worth HL$5.8M or $745K USD.

So sick, as ElkY would say. $2.8 million USD was up for grabs in the fourth event at the Triton Super High Roller series.

Kenneth Kee cashed in another event, his second of the series. He avenged a runner-up finish against Nick Shulman in the opening event. Kee won the biggest event thus far and now has a first-place win and second place finish to brag about

Ivan Leow cashed for a third time in four events. Leow only managed a sixth-place finish, but it was another deep run for the Malaysian.

The American could not pull off the comeback win. Katz settled on a second-place finish, which was still worth a pretty penny. Katz took home HK$13.9M, or roughly $1.7M USD. Not too bad for a couple days of work, eh?

Watch this quick clip of an interview with David Peters moments after his victory in the 6-Max....