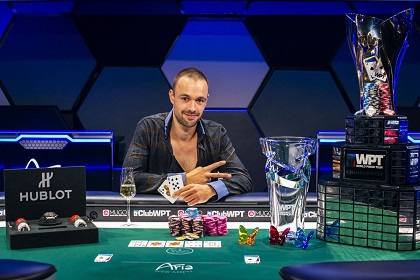 Ship it to Germany. Again. Ole Schemion is no stranger to the winner's circle. He's taken that spot too many times to count. He's one of those Germans who cracked the poker code. Some of the best of the best of the World Poker Tour took their shots at Ole Schemion, but none of them could defeat him. Dapper Tony Dunst and his sharp suits came close... but no cigar. Dunst had to settle on a runner-up finish while the German went all the way to the Promised Land. Once again.

Ole Schemion waltzed into the final table with a monstrous stack with nearly 1.9M, or almost half the chips in play. Ryan Tosoc was the closest and trailed by 1.3M. Tony Dunst was not far behind Tosoc with 475K.

Nick Schulman came in as the short stack with under a quarter-mil in chips. Griffin Paul and Simon Lam were not far behind him.

Short-stacked Nick Schulman busted on the 17th hand. He tried to double up with Ace-Jack but got outflopped by Tosoc's King-Queen.

Griffin Paul hit the bricks in fifth place when his Big Slick lost to Tony Dunst's pocket fives. Dunst flopped a set of fives on an all spades board. Paul held the

for a flush draw. He whiffed on the flush and missed the overs. Dunst dodged a hailstorm of bullets to win the pot. Paul took home $84,140 for fifth place.

against Simon Lam's top pair. Schemion turned a ten0high flush and Lam failed to improve. Lam hit the road in fourth place, which paid out $116K.

At one point the final three were nearly even in chips. Dunst pulled away with the lead. Schemion and Tosoc rumbled. Both got it all-in with flush and gutterball draws. Schemion's

When heads-up began, Dunst trailed 2.1M to 1.7M. Heads-up only last 17 hands before Schemion put away Dunst. Schemion flopped the joint with

against a pair of flopped Kings for Dunst. Schemion held on to win the pot and the tournament. Dunst banked $250,265 for second place. Not too shabby, eh?