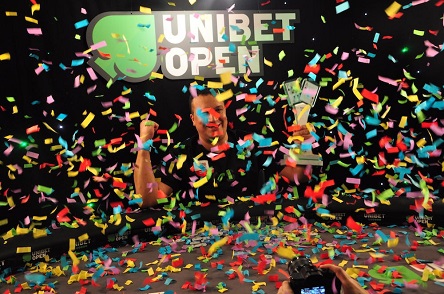 Joey Knish. There's a local version of the consummate grinder in every city and every small gambling town all over the world. The Knishes have the uncanny ability to keep moving forward and staying alive. Survival is as important as hitting it big.

Anyone can win a big tournament. There's more flashes in the pan and one hit wonders out there than there are bona fide superstars. So many players seemingly come out of nowhere only to disappear just as fast.

It takes a lot of patience, grit, determination, and a bit of luck and fortitude in order to keep playing tournament poker over a decade or more. All those bad beats, and even worst -- all those second and third-party bad beat stories -- add up.

Instead of being an oasis, a poker table can become a prison, or a mental institution or a waiting room from hell. Kudos to anyone who can continue to show up to play poker on a continual basis and play consistent, despite all the obvious pitfalls and surrounded by negativity from downtrodden players, know-it-all pros, jaded vets, brokedicks, two-bit hustlers, degens and smarmy swamp rats.

A main component to achieving grinder status is to drown out the nonsense and rise above the guff. The best of the best and true survivors developed a thick skin and zen-teflon attitude where nothing sticks and it's just onto the next hand.

The Algerian Joey Knish is Omar Lakhdari. He has amassed over $1.6 million in tournament winnings over the last decade. He's played in a couple of big events in Europe and at the WSOP in Las Vegas, but he never cashed for more than six figures. He tallied his million plus in earnings the old school way... by grinding it out a little bit at a time.

Lakhdari paid his dues. He played Texas Hold'em all over the planet from Las Vegas to Paris and all stops in between. After a decade grinding it out in casinos all over the world, Lakhdari finally took down a title when he won the 2019 Unibet Open Paris Main Event.

The 2019 Unibet Open Paris Main Event, host at Club Circus Paris in Paris, had a buy-in worth €1,100. A total of 480 brave souls took a shot at the Unibet Open title. They generated a juicy prize pool worth €460,800. Only the lucky top 63 places were paid out, but most of the nutella and fresh croissants were set aside for the final table... with the lion's share of the cheesecake set aside to the champion.

Vladamir Nex busted in third place, which set up the heads-up finale between Quoc Dung Le and Omar Lakhdari.

Alas, no one could prevent Omar Lakhdari from going all the way. He picked off Quoc Dung Le in second place to win the title and cash. Quoc Dung Le banked €55,270 or $60,868 for second place. Not too shabby for a runner-up, eh?

Lakhdari is known as the top Algerian money winner according to Hendon Mob with over $1.68 million in cashes. He's a true grinder in the fashion of Joey Knish. He earned seven figures with cashing north of €50K only twice. And once was at the 2019 Unibet Open just now.