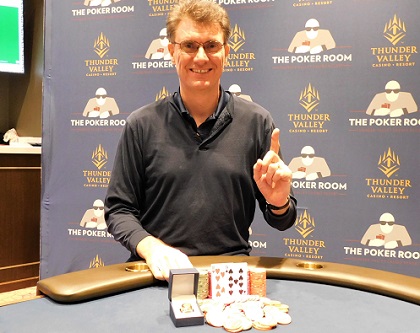 Who said fourth time is a charm? Was it St. Patrick? Or perhaps Noel Gallagher? Or was in Rimbaud or RZA? I forget. My memory is fuzzy, but if you're Paul Richardson, you will never forget the moment he broke through to the winner's circle at Thunder Valley Casino in Lincoln, California, just outside of Sacramento.

Last September, Richardson ran good with his two biggest cashes of his career. He final tabled a $1,650 Main Event for the Heartland Poker Tour in Blackhawk, Colorado. Richardson banked nearly $68K for his largest cash of his career. A couple of days later, Richardson went deep at the WSOP Circuit at Thunder Valley with another fourth-place finish, which paid out $57K.

Richardson returned to Thunder Valley with a specific goal... a WSOP Circuit ring. He had what it took to go deep and final table the Main, but he had yet to close it.

Only 96 players returned to action on Day 2.

Richardson came into the final table sixth in chips, but that did not deter him. Roman Shainiuk came into the final table with the lead and 2.3 million. Paul Chai and Arish Nat were the only other players with over 2 million. Landen Lucas survived the cut as the short stack. Also still alive were Bobby Pham, Soumitra Nagar, Travis Fujisaka, Terry Reardon, and Paul Richardson.

Travis Fujisaka busted in third place, which paid out $58K. His elimination set up the heads-up joust between Arish Nat and Paul Richardson.

Arish Nat busted in second place. For a runner-up finished Nat earned a payout worth $80,761. Not too shabby, eh?

Paul Richardson secured his largest cash to date with his first-ever six-figure cash. Richardson banked $130,667 and a WSOP Circuit ring.