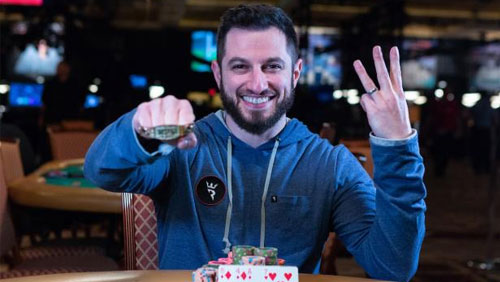 OMGClayAiken! What's he been up to? Galfond has been focusing on the business side of the poker business the last couple of years. He's still playing some poker and even won a bracelet at the 2018 WSOP this past summer in Las Vegas. However, he is not the insane schedule he used to play during the peak of the online poker boom. Hey, getting married will do that to you.

At one point, OMGClayAiken's tables were the most-watched cash games on the internet. And this was in the halcyon era before Twitch and streaming technology. That's back in the say when you had to fire up Full Tilt and sweat the action from the rail. Galfond dominated the PLO tables for several years and he ran up his bankroll to such high extremes that he could afford a baller penthouse in New York City.

Back in 2008, Galfond bought two condos in the East Village that were on top of each other on the top two floors. Galfond had a vision of a slide that connected the two units. He hired Turett Collaborative Architects to create a helical slide.

Wait what? Yes, a baller slide. Ah, I miss the gravy days.

Shortly after Black Friday, Galfond sold his East Village pad and migrated north of the border to Vancouver so he could play online poker. He focused on ZOOM on PokerStars and some other nosebleed mixed games between $200/$400 all the way up to $1.5K/$3K.

Galfond made headlines this summer when he won his third-career bracelet at the 2018 World Series of Poker. OMGClayAiken shipped the $10,000 PLO8 Championship for a $568K score. Ah, it's mere pocket change! But he wanted the third piece of bling.

In recent years, Galfond pivoted from an online grinder to an astute businessman and a try caretaker of the online poker community. Galfond came on Joey Ingram's popular show The Poker Life Podcast to discuss the latest stage of his life.

In a two-hour episode, they chatted extensively about Run It Up, which is Galfond's brain child. Galfond initially set up Run It Once (RIO) with the poker community in mind.

"It's really important for us to find a way to get the community involved," Said Galfond. "Thankfully, the community is still with us after all this time. We're building something that will help poker.

The two also discussed bots on RIO and their impact on the online poker landscape.

"I want to be a bot checker," said Ingram. "Bot checker! Let me deal with these motherfuckers. We will shut these bots down, Phil! I'm ready. I'm coming after them."

"Bots is a very serious issue," said Galfond. "We made it more annoying on our site than any other site."

To fight the bots, Galfond instituted certain protections on his site. They do not offer play money games and some chat functions are not the same as other online poker sites in order to eliminate screen scrapers. It's an ingoing battle, but Galfond hopes they can inevitably come out on top.

"The combination of detection plus hassle is the way we're going about it," explained Galfond.

But it's not going to be so easy because programmers are used to coming across obstacles and overcoming setbacks.