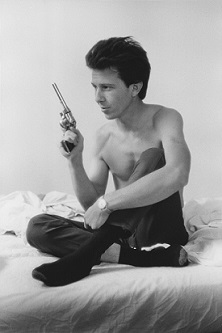 Don't piss off Larry Clark at the poker tables! The renowned photographer and film maker recently appeared on the WTF Podcast with Marc Maron and Clark revealed why he spent 19 months in prison in 1976. He was arrested and jailed for shooting a man in the arm after the man refused to pay up when the poker game ended.

Clark made a name for himself with his stunning and visceral underground photography. He amassed a collection of autobiographical photos featuring himself and his delinquent friends that he shot in and around Tulsa between 1963 and 1971. The limited-run photography book, Tulsa, became an instant sensation. It has since become a collector's item and fetching a price tag in excess of $8,000 for an original edition. Clark's gritty Tulsa photos influenced several Hollywood directors and heavily-impacted films by Gus Van Sant (Drugstore Cowboy), Francis Ford Coppola (Rumble Fish) and Martin Scorsese (Taxi Driver).

Clark made a name for himself once again in the 1990s with his directorial debut with Kids. Clark directed the controversial coming-of-age-tale-during-AIDS film about skater kids in New York City's East Village. Kids featured the screenwriting debut of Harmony Korine and put actresses Rosario Dawson and Chloe Sevigny on the map.

Most recently, Clark has been making the rounds to promote his gallery show in downtown Los Angeles. He recently appeared on two different podcasts with Bret Easton Ellis and Marc Maron. In both podcast interviews, Clark referenced being incarcerated for a short stint in the 1970s for shooting someone during a poker game.

During his WTF interview (his poker story begins at the 1:07 mark), Larry Clark told host Marc Maron about the downside of his outlaw years when he was getting wasted on speed and eventually got thrown in jail.

"I was in a poker game with some guys I didn't know well. I won and they wouldn't pay me. One guy pulled out a gun. So I left with my girlfriend. I went out to the car and got a gun. Came back. Went into the house. And shot him in the arm. On purpose. Then left. About a week later I got busted. The cops stopped me and busted me for shooting this guy. My mindset was 'What? This guy snitched on me? Why would he snitch' For me and my friends, it was the old wild west... Billy the Kid and Jesse James. If someone pulls a gun on you, (then) you get a gun and shoot them. I was shocked he snitched on me. I got four years on one charge and one year on another. I did 19 months. I paroled out in 1978."