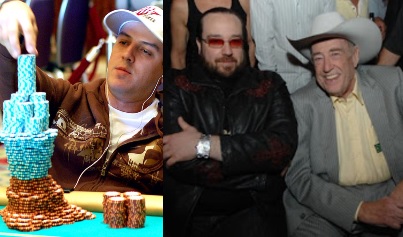 Todd Brunson dropped out of college against his father's wishes. He ended a potential career as a lawyer in order to focus on no-limit hold'em…which irked his father even more so. The legendary Doyle Brunson finally caved and supported his son's wishes to follow in his (massive) footsteps. Todd is only 47 years old but he has one WSOP bracelet and shipped over $4 million in career tournament earnings. But that's peanuts compared to what Todd raked in playing high-stakes cash games. Todd Brunson's big moment came during the infamous cash games against Texas banker and billionaire Andy Beal. Brunson had a great read on Beal, who seemed unbeatable until he sat down to play against Todd Brunson. Todd won $13.5 million during a two-day stint playing Beal heads-up. It is considered one of the greatest scores of all time.

Carlos Mortensen is 44-years old and one of the youngest members to be inducted. Originally from Spain, Mortensen made a splash at the 2001 WSOP Main Event when he defeated Dewey Tomko heads-up for the victory. Since then, the Vegas resident has won another WSOP bracelet and almost $10 million combined on the WPT and the WSOP. Mortensen won three events on the WPT including the 2007 WPT Championship at the Bellagio for a $3.9 million score. He's also the only player to win both the WPT Championship and the WSOP Main Event. Mortensen is the career all-time money leader in the WPT, which is even more amazing considering how few events he actually played.

review our partners rooms
More news Poker business
Las Vegas and Reno on Lockdown, All Casinos Closed for 30 Days Due to Coronavirus

The Bike and Commerce Casinos in LA, Plus Wynn and MGM Las Vegas now closed due to Coronavirus

Macau shuts down casinos for 2 weeks to contain coronavirus