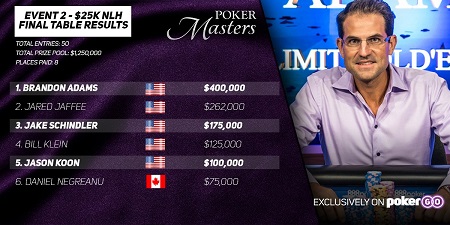 Who's gonna ship the coveted purple jacket? Right now, Brandon Adams has the inside track. Adams got off to a hot start. He final tabled the first two events and won Event #2. Adams finished in fourth place in Event #1. Thus far he's banked $469K and it's only Sunday.

The 2018 Poker Masters kicked off Friday at the Aria Casino in Las Vegas. The opening event -- a $10K affair -- attracted 69 runners and a prize pool worth $690,000. David Peters was the only one left standing. His final table included Ike Haxton, Cord Garcia, Brandon Adams, Brian Green, and Rainer Kempe. David Eldridge bubbled the final table in seventh place.

Peters defeated Brian Green heads-up for the victory. Peters banked $193,200 and rocketed to the top of the purple leaderboard.

Only the top 8 places paid out. Cary Katz cashed in both events and he settled on a min-cash in Event #2. Dom Nitsche was the lone German to cash in the $25K when he bubbled the final table in seventh place.

The final six included Adams, Jared Jaffee, Jake Schindler, Bill Klein, Jason Koon, and Daniel Negreanu. Kid Poker could do no better than sixth place and he was the first player to exit the final table.

Jason Koon has been having a sensational 2018. It's a shocker that he didn't win this one, but he managed a fifth-place cash. Bill Klein exited in fourth place, while Jake Schindler was dunzo in third. That set up the finale between Jared Jaffee and Brandon Adams.

Jaffee could put away Adams and he settled on a runner-up score worth $262K. Not too shabby, eh?

Brandon Adams earned a first-place payday worth $400K. Add his winnings from the first event and he's got $469K for a couple days of work.

Adams is currently in the top spot in the purple leaderboard.