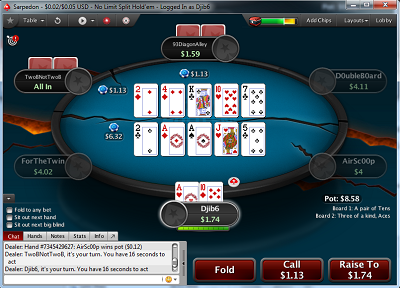 PokerStars announced a new cash game format to their array of online poker offerings. Split Hold'em is a variation of Texas Hold'em with the addition of a second board of community cards. Yes, there's two flops, two turns, and two rivers. You have to win both boards to win the entire pot. Split Hold'em is the newest innovation for PokerStars, who introduced Power Up last year. 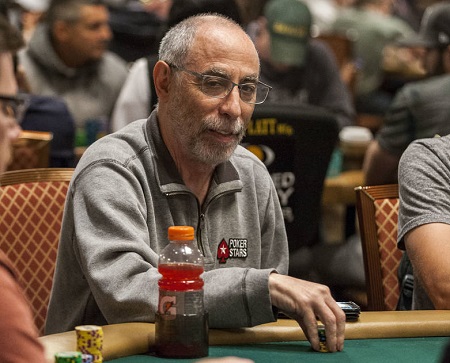 Joey Ingram invited Barry Greenstein to appear on the Poker Life Podcast. They had a four-hour discussion with Barry telling a myriad of stories -- both on the felt and off -- about a variety of topics including playing mixed games, playing against Tom Dwan, juicy cash games in China, Viffer stories, playing in Larry Flynt's home game in the Hollywood Hills, and some PokerStars talk. Ingram mentioned, "This was one of my favorite podcasts of all time. So much wisdom and great stories." 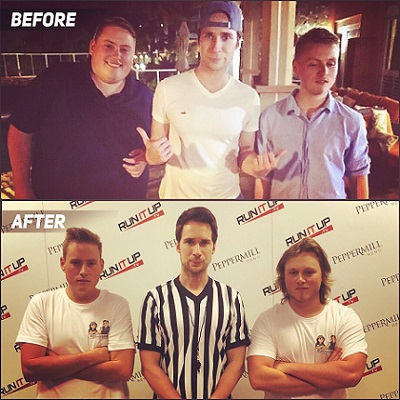 Ship it to Matt and Jamie Staples! The brothers earned $150,000 for winning a wild proposition wager with Bill Perkins. A year ago, Perkins offered the Staples brothers 50-1 odds on a $3,000 bet that Matt and Jamie could not weigh within a single pound of each other. The oversized Jamie and undersized Matt were 170+ pounds apart and accepted the wager. The brothers worked on their bodies for a full year. Matt added 50+ pounds, while Jamie dropped 117 pounds. At the weigh in on Sunday in Reno, bother brothers weighed the same... 188.3 pounds. 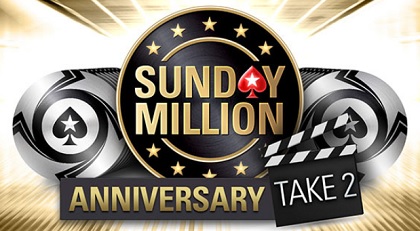 The Monster Series will return to partypoker starting April 29 and it will run thru May 6. This installment of the Monster Series has a $2.7 million guarantee with 123 tournaments. The buy-ins will range from a modest $0.44 to $33. The Monster Championship event on May 6 has a $33 buy-in with a $300K guarantee. 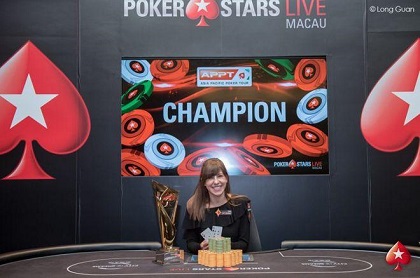 The City of Dreams Casino in Macau has been hosting the APPT Macau. A pair of high roller events went down over the weekend. Canadian pro Kristen Bicknell won the $80K HKD High Roller for a score worth $2.1M HKD or $279K USD. Meanwhile, Alex Foxen just shipped the $400K HKD Super High Roller title for $7.5M HKD, or a shade under $1M USD. 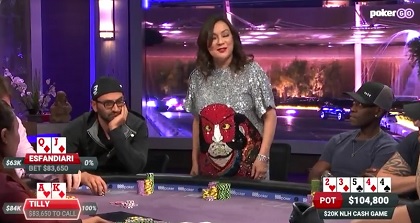 Poker After Dark continued with a new format this week on PokerGO. Moving Violations featured a minimum $20,000 buy-in with $50-$100 NL blinds. This installment included a couple of celebrities such as Don Cheadle and Jennifer Tilly. The infamous Antonio Esfandiari put Jennifer Tilly on "full tilt" after he got her to fold the better hand with a massive river bluff. Oh and there was another doozy of a hand. In a multi-way pot worth $250,000, Tilly flopped a set with pocket Aces but Esfandiari gambled it up with a big draw and got there on the river.

The Dragon slays The Bike and wins WSOP Circuit 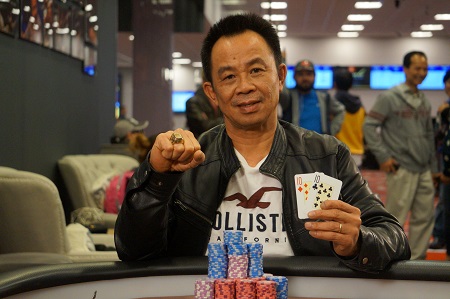 David 'The Dragon' Pham has been scorching opponents for a couple of decades. The three-time bracelet winner added a WSOP Circuit ring to his illustrious collection. The Dragon bested a field of 705 runners to win the WSOP Circuit Main Event at The Bicycle Casino outside of Los Angeles. The Dragon banked approximately $217K for his victory. 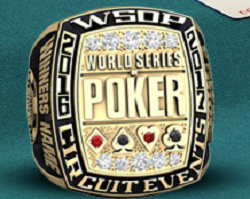 The WSOP Circuit headed to sunny Southern California for its latest stop in Los Angeles. The Bicycle Casino hosted the WSOP Circuit with the Main Event attracting 705 runners. After two days of nonstop action, only 11 hopefuls remain. Owen ‘ocrowe' Crowe is the big stack as play heads into the final day. David the Dragon, Kevin Gimble, and Kristy Arnett are among those still alive and in the hunt for a first-place prize worth $217K and a coveted Circuit ring.

The 2018 High Rollers series runs March 18 through March 26 on PokerStars with five additional events to this year's schedule. The High Rollers consist of 27 exciting, thrilling, sensational events. There's $10 million in guarantees at stake including three events with at least $1 million set aside for the prize pool. The $2,100 buy-in Main Event has a whopping $2 million guarantee. There's also six turbos and three hyper-turbos to cater to the ADHD cardslingers. The lowest buy-in for the 2018 High Rollers is a mere $530, while the deep end of the pool includes a pair of $10K events and a trio of $5K events.

PokerStars announced new regional events in Europe and more chances to win a Platinum Pass. The PokerStars Festival Marbella will run from June 4-10 on Spain's Costa del Sol, and the Casino Barriere in Lille will host PokerStars Festival Lille from July 16-22. Also, new MEGASTACK events were announced in Dublin and London for next month, in addition to Gujan-Mestras in the south of France later this summer. Players in these events will also have a chance to win a Platinum Pass to the 2019 PSPC in the Bahamas, with six at stake in Lille. 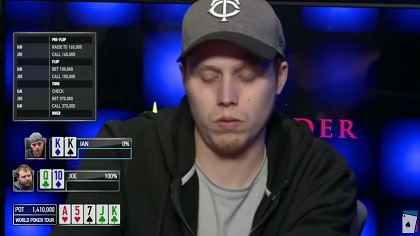 From worst-to-first at the Thunder Valley Casino Resort. David Larson came into the final table of the WPT Rolling Thunder as the short stack or sixth in chips. That did not deter him from reversing his fortunes. David Larson earned $295K for his victory. Former WSOP champ Joe McKeehen finished in third place. 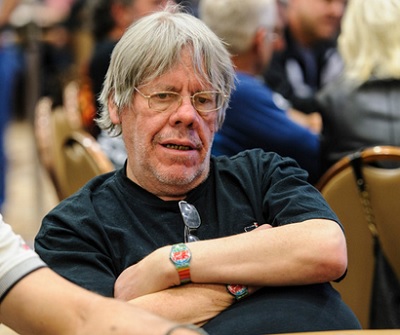 Paul 'X-22' Magriel, former chess prodigy and legendary backgammon player, passed away in his sleep at the age of 71. Erik Seidel confirmed Magriel's passing on Twitter today. Magriel got his 15 minutes of modern fame on an early episode of the World Poker Tour with his infamous verbal tick "Quack quack!" Magriel had also become a nemesis of Phil Hellmuth over the years especially after Magriel busted Hellmuth at the 2005 WSOP. 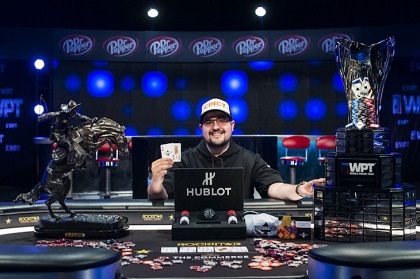 The house always wins, eh? Bettors and gamblers dropped $1 billion in Nevada during the first month of 2018. That's the 36th time since March 2005 that casinos in Nevada won $1 billion in a single month. January 2018's haul is the best month for Nevada since last March.

10 Platinum Passes up for grabs this weekend 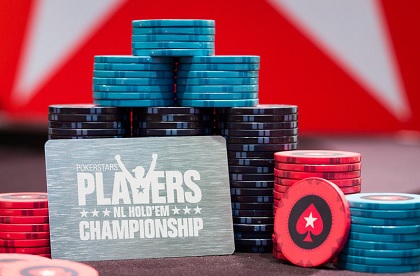 Do you want to win a juicy package to the Bahamas? Then you're in luck. Over the next three days, you have ten chances this weekend to win a Platinum Pass to the 2019 PokerStars Players Championship (PSPC). PokerStars will be giving away ten more Platinum Passes valued at $30K. Active social media participants have a chance. If you cashed in the Sunday Million, Sunday Warm-Up, Sunday Storm, or Mini-Sunday Million then you have a chance. And the triumphant winner of the Turbo Series Main Event also gets a Platinum Pass. And players from Spain/France specifically have a shot at a Platinum Pass. 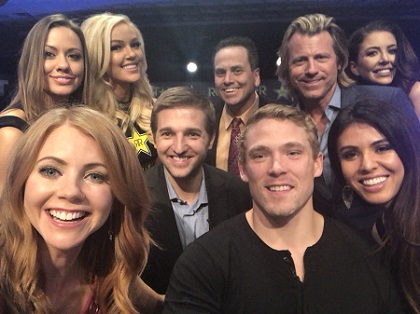 The 2018 L.A. Poker Classic at Commerce Casino on the outskirts of Los Angeles had a pair of WPT events running this week. Alex Foxen won the $25,500 buy-in Rockstar Energey High Roller for a $425K score after he faded a field of 50 high ballas. Meanwhile, the WPT L.A. Poker Classic Main Event is down to the final table. Aussie Millions champ Toby Lewis is the chip leader with six remaining. First place pays out $1 million. Can anyone stop Lewis? Among those still alive... Dennis Blieden, Peter Hengsakul, Marc Macdonnell, Manuel Martinez, and Derek Wolters. The final table will be streamed on PokerGO.