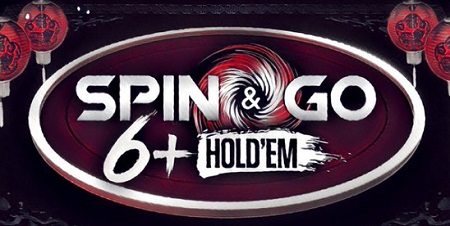 Play those 6+ Hold'em cash games while you can! In the latest bit of news to hit online poker industry sites, PokerStars introduced 6+ Hold'em earlier this summer in an attempt to attract Short Deck Hold'em enthusiasts. Less than 2 months later, they quietly removed the Spin & Go version of 6+ Hold'em. At first it began with the highest buy-in Spins before the rest of them vanished. Poof!

According to PokerFuse... "Initially they were are available at five different buy-ins: $1, $3, $15, $30, and $100. The operator later added a $7 buy-in. On September 2, PokerStars removed the high buy-ins, leaving only the $1, $3, and $7 games. As of today, they are no longer present in the PokerStars client at all, and advertisements for the game have been removed from the 6+ Hold'em cash game lobby."

At the present moment, cash games are still available. However, if you were one of the few avid Spin & Go short deck players, then you're S.O.L. with this one.

Sometimes PokerStars hits a home run with a "borrowed" form of poker like Zoom Poker (it's like crack flavored cocaine-wrapped bacon). Sometimes the red spade creates a fun new variation of poker like Beat the Clock. Other times it's a dud like Split Hold'em. Or just plain weird like Power Up Poker.

I have no idea why 6+ Hold'em has been floundering. Then again, the Spin & Go concept is low hanging fruit for the online poker big wig. They've been printing money on those since the get go. Sure they've given away a ton of cash and prizes, but just think how much money they generated from the Spin & Go concept? Those are popular, but I guess 6+ Hold'em is just not one of those games that can run around the clock with a heavy user base.

Short Deck Hold'em took the high stakes community by storm several years ago. Short Deck has been played in Asia and in cash games all over the world for over a decade or more. I don't know the exact origin and I'm too lazy and baked to actually look it up. Short Deck is an integral part of the Triton Poker Tour. Short Deck also made its debut as a bracelet event at the 2019 WSOP in Las Vegas.

But with Short Deck a.k.a. 6+ Hold'em, there's a ton of action and a little bit of nuance on how to play the game that's just like Texas Hold'em except all the 2-3-4-5 cards have been removed. The rules changed slightly to make flushes a premium hand with nine possible cards to fill it in instead of 13.

Pros took the game rather quickly. Friends in my local home game also loved it.

"Poker on steroids!" said Big Dog, a huge donor in a weekly home game in San Francisco. He got hooked, and who wouldn't?

So then why the heck is PokerStars HQ pulling the plug?

It must have to do with the branding. 6+ Hold'em does not sound anything like Short Deck. It sounds like a game with 6 community cards or 6 cards prelfop. It could even be a home game with 6's used as wild cards. But it sounds nothing similar to Short Deck.

PokerStars has always been ahead of the curve with branding. The Red Spade is one of those iconic images in the gambling world and everyone knows it's PokerStars. But someone dropped the ball with 6+ and they shoulda just called it Shorty or Shortie Hold'em or how about SHO-D'EM or Shodem? Any of those name tweaks have some sort of relation to Short Deck. But 6+ is just numerically odd.

Branding aside, perhaps there was not as much info and help out there for noobs. It's not like here's Celebrity Poker Short Deck or the World Short Deck Tour on TV or various streaming entities. Maybe if we had VVP or the cast of Th West Wing slugging it out in a bunch of televised Short Deck final tables, there would be more of an interest in the game.

Too bad this was not the apex of the glorious online poker boom because PokerStars would have generated enough content to keep noobs happy and educated. Plus they would have launched a tournament series or some type of game show involving Daniel Negreanu. But these days, it's a skeleton crew cranking out dank memes out of a basement in the Toronto burbs.

RIP 6+ Hold'em Spin & Gos. Play those 6+ tables as much as you can before those disappear in the dark night.