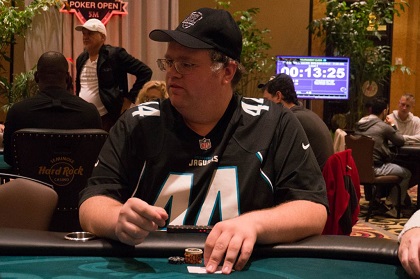 Who didn't get a Platinum Pass for Christmas? Okay, most of you found a lump of coal in your stocking from Santa Claus. But for a few select people, they had a Christmas to remember. We're talking like a feel-good, heartwarming, tear jerker like one of those Charlie Brown Christmas specials.

While most of the internet argued over hot button issues like whether or not Die Hard is a Christmas movie (I dunno what the big fuss is about... it's an action move that takes place during Christmas time and there's a dead terrorist with HO HO HO written on his Eurotrash sweater), PokerStars was busy doling out Platinum Passes.

KevMath a.k.a. Kevin Mathers from Syracuse, New York made a name for himself as a moderator on 2+2 forums before he parlayed his forum fame into a legitimate poker media job. Mathers worked for numerous publications over the years including Bluff Magazine and Pocket Fives. He also manned the Twitter account for the WSOP and acted as their information Czar. If you asked a question, KevMath was quick to find an answer. He performed a valuable service to the poker community for the last 15 years, so it was awesome to see him get plucked to head to the Bahamas for free. Who cares if he's a bot or an AI program or some sort of alien reconnaissance project, KevMath is going to the Bahamas.

I often remarked that KevMath is the James Brown of poker media and it's not because of his dance moves. He's a hard worker, one of the most diligent in the poker media realm. KevMath had a work ethic that stemmed from his pure love of the game. PokerStars finally rewarded him for his dedication to the game with a Platinum Pass.

Linda Johnson is known as the First Lady of Poker because she was one of the first women to make headway in the poker industry. It's not easy being a woman in the poker world and Johnson fought back a tidal wave of discrimination during her initial years in poker. She persisted and the entire poker world is better for her work as ambassador and her contributions to poker media and the tournament world. Once again, the love of the game shines through and it's good to see someone rewarded for their relentless passion for that silly game of poker.

Oh yeah, and Linda Johnson won a bracelet in the late 90s. Back when Fedor Holz was still in diapers. It was Razz too. She earned that bling the hard way by surviving brick city.

In case you were wondering, no Platinum Passes were rewarded for Festivus celebrations. There were no special passes handed out after a proper airing of the grievances or the fits of strength.

Over at PokerStars Blog, Brad Willis sacrificed the holiday with his family to work for a couple of hours in order to share the story about the generosity and goodwill of poker players on a special holiday.

Jeremy from Tennessee is going to the 2019 WSOP thanks to a gift from his wife. And that goodwill inspired another and all of a sudden Joey Ingram gets involved and Jeremy is going to the Bahamas to participate in the PSPC with a Platinum Pass.

Another Christmas miracle from the red spade.