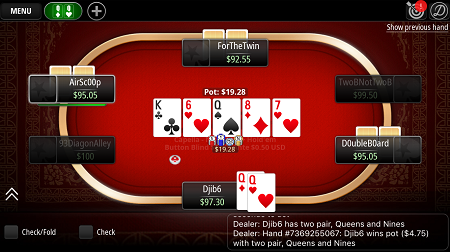 Another day, another new game from PokerStars. How many other new games do they have cooking in their secret research laboratories hidden in the depths of Greenland? They recently unveiled 6+ Hold'em. It's not a new game per se, just a rebranding of short-deck popular. Short-deck is an insanely popular game among high stakes nosebleed regulars in Asia. It's slowly integrating itself into the mainstream poker world. All the big ballers in Europe play it. It's part of Poker Masters events in Vegas.

In the last couple of years, PokerStars unveiled tweaks on your favorite game. The results were Fusion Poker, Unfold Poker, Split Poker, Showtime Hold'em, Power Up, and Beat the Clock.

I still have no idea what Power Up is all about, but I loved Beat the Clock and wish they brought that back. Split Poker was a total snoozer bust. Showtime had so much potential and I actually played it. Too bad that never gained any steam among the cool influencers. Unfold Poker is one of those games that makes you think, "What the hell were they smoking that day in the lab?"

The latest release, Fusion Poker, seemed like a fun game you'd play in your home game that starts out like Texas Hold'em and ends up like Omaha. Gamboooool!

Instead of making up stuff in thin air, the game makers simply made an online version of a popular live game. That's the main reason why this one will stick around. Plus the gold dragons look bad ass against the red backdrop.

Here's what they are saying at Stars HQ. According to Chris Straghalis, Director of Poker Product at PokerStars, "6+ is an exciting poker variant that often produces big hands and a lot of action. While the format has proven popular with high stakes players, the range of stakes available on PokerStars and similarities to hold'em mean that it should appeal to those who may want to try a new game but don't want something too different. We're looking forward to seeing what people think."

The coolest and easiest aspect of 6+ Hold'em is the simple fact that you do not have to learn a whole new game. It's hold'em without the lowest cards in the deck with one main tweak about rankings. Flushes are rarer and become a premium and more valuable than a full house.

Oh and there's the button blind. That's a nifty little experiment in which the button posts a single blind instead of the typical small blind/big blind situation.

After getting into the rhythm of playing a few orbits, you realize how much more fun this version is compared to old school hold'em. Definitely speeds up the game but and creates a new wrinkle. You flop two pair more than you'd think and four-card straights. You have to figure out how far you're ahead or behind.

Never forget that flushes beat boats! Don't forget about the Aces too. It can be used as a low or high. And the wheel is A-6-7-8-9 and as always, Broadway straight is 10-J-Q-K-A.

For more details, head over to PokerStars Blog.