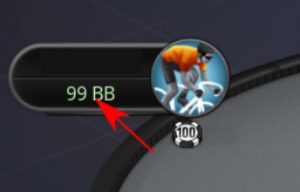 Get ready for big blind action at PokerStars. The bright minds at the Red Spade HQ have introduced a nuance that will should simplify decisions for multi-table tournament players.

PokerStars tried to find the newest and hippest form of poker after allowing their mad scientists to tweak and pull and prod and create new variations of our favorite games. Over the last couple of years, PokerStars introduced different variations of poker such as Showtime, 6+ Hold'em, Split, Power Up, Fusion, Unfold, and Beat the Clock. And once again, PokerStars is up to new tricks.

PokerStars has been busy once again trying to tweak online poker and improve the game for its users. The newest tweak will be the "Stacks in Big Blinds" option that allows users to view their stack in BBs instead of normal tournament chips.

This new feature will be available by opting in. You can also toggle back and forth to view stacks as the normal view or via BB.

"When we look at where poker was before the online days, it's fair to say that now there's a lot more study, analytics, and thinking about concepts of the game than ever before," said Chris Straghalis. "The overall meta-game of poker is looked at very differently today. Poker is a game of incomplete information, and that's what makes it an amazingly beautiful game. It's that incomplete information which keeps us coming back for more. It's what separates poker from chess."

According to Straghalis, the players spoke and the Red Spade listened. Players wanted the option to view chips in terms of Big Blinds, so the suits made a change to accommodate the people.

"The information in knowing your stack compared with what the current blind levels are is of such critical importance that forcing people to make a mental calculation seems somewhat redundant when we can make the calculation for them, dynamically and on the fly," said Straghalis. "There is third-party software which lets people do this, so there's clearly a demand and a need for it. It makes sense that you could take it to the next step, and instead of just showing the stacks in terms of big blinds, we can show every bet you make in big blinds too."

According to PokerStars Blog, "To turn the feature on, players must opt-in in via the Table Display section in the PokerStars client settings. From then on, you will be able to toggle back and forth between showing stacks in big blinds and stacks in chips."

This specialty will be great for players bogged down in multi-tabling along with popular streamers, many of whom use third-party software anyway.

For more info, head over to PokerStars Blog.