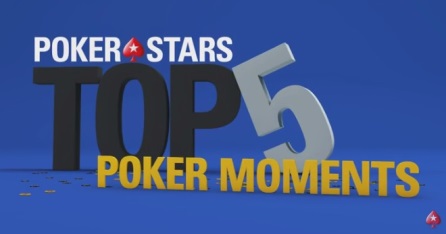 Over the last decade, PokerStars TV captured the thrills of victory and the disastrous lows of life on the tournament trail, especially on the European Poker Tour. PokerStars TV also recorded stunning moments on different TV shows such as Shark Tank and Millionaire Maker. Luckily, someone in the home office sat down and watched every single piece of footage to determine the top 5 Poker Moments over the last 12 years.

It's always hard to pick a Top 5 list because there are always so many epic moments to choose from. I'd love to see which amazing moments missed the cut. But the ones they picked were definitely standouts. Daniel Negreanu, as expected, is included on this list. Danny Boy made it thrice! Yes, Negreanu is mentioned in three epic moments over the last 12 years including a stint on the show Millionaire Maker, a heads-up stint against Phil Ivey, and he was seated at the “sickest final table” in the history of the EPT. Also Included on this Top 5 Poker Moments list are soccer stud Ronaldo from Brazil, Vicky Coren (who won not one, but two EPTs), and Steve O'Dwyer who navigated the most difficult final table ever assembled on the EPT, or anywhere for that matter. 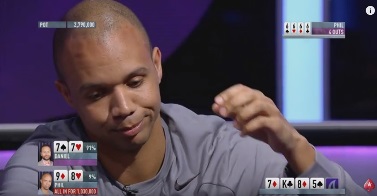 5. Ronaldo at the 2015 PCA. Brazilian footballer Ronaldo made a splash during his deep run in the 2015 PCA Main Event. The soccer legend also put a wicked bad beat on Big Slick with good old Ad-2d. Of course, in true dramatic fashion Ronaldo whiffed on his flush draw, but he spiked a deuce on the river to win the pot with a backdoor pair of deuces to squeak out a win against Big Slick.

4. Heads-up vs. Negreanu for $1 million! On the program Millionaire Maker, only pro Daniel Negreanu could prevent an amateur named Mike from winning $1 million in cash. Mike was a 9/11 first responder from New York City and a poker enthusiast. Mike was on an episode of the old TV show Million Dollar Challenge (remember that during the height of the American poker boom?). Mike was heads-up against short-stacked Daniel Negreanu. Mike called all-in with 7-5 offsuit versus Negreanu's K-4 with one million bucks at stake. Negreanu flopped a King to improve his lead, but Mike flopped a gutshot draw. Mike rivered an 8 to make his straight and win the hand and the million bucks. "Unbelievable!" remarked Negreanu.

3. Ivey vs. Negreanu. The two played heads-up on the show Shark Cage. It was a rare and special moment because the two had never played heads-up in a tournament before. Negreanu got it all in with a set of sevens with 7-7 against Ivey's9-8 and a gutter draw. With one card to come, only a six would save Ivey. Alas, it wasn't Ivey's day and Danny Boy dodged the bullet.

2. Sickest Final Table... Ever!?! How about another Daniel Negreanu moment? Kid Poker made three of the top five moments. In this instance, Negreanu was seated at the "greatest final table in EPT history" during the EPT9 Grand Final in Monaco. The stacked final table included Daniel Negreanu, Steve O'Dwyer, Johnny Lodden, Jason Mercier, Jake Cody, Grant Levy, Andrew Panting, and Noah Schwartz. Alas, it wasn't going to be Negreanu's day because it was Steve O'Dwyer's chance to shine. As announcer Joe Stapleton explained, "O'Dwyer mowed down the sickest final table ever assembled!"

1. Vickey Coren, Two-time EPT champ. The top spot went to Vicky Coren, who became the first and only two-time winner on the EPT. In 2006, she won the EPT London and became the first woman to become a champion, then she made history again in 2014 at the EPT San Remo with her second EPT win. In dramatic fashion, she beat out pocket Aces with Q-J. Coren flopped two pair, but her opponent Fundaro turned a gutshot draw on a Q-J-10-7 board. Fundaro shoved the turn and Coren called. Alas, Coren faded one of Fundaro's numerous outs and her two pair held up to win the pot and the tournament. Her win at the 2014 EPT San Remo marked the first time anyone won two EPT titles!