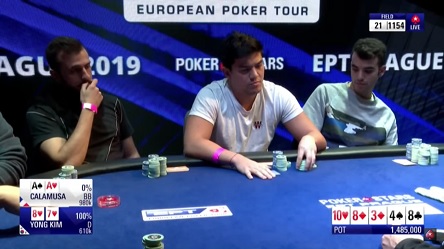 We've all been there. If you play enough poker, you come close to seeing it all... bad beats, suck outs, and crazy moments. But it's hard to be truly impartial and take a look at the big picture through an unfiltered lens, especially when you're card dead and finally wake up with a pair of lovely Aces. Ho hum... nothing ruins a day faster that having your pocket Aces snapped off by some mook who called you with garbage all the way down to the river, where they promptly spike a three-outer to ravish your glorious dual Aces. Crash and burn... hard.

Well, luckily PokerStars captured a few incidents in which a pair of Aces were also beat down by inferior hands. For the players holding AA, this new compilation video is akin to a bunch of car crashes be shown over and over to the victims. But for those of us seeking sympathy after another bad beat with pocket Aces, the latest video by PokerStars gives you a wee bit of comfort knowing that the poker gods are angry with other players as well. Yes, it's not just you that gets our Aces snapped off. It happens to players at televised final tables as well.

The crack unit of editors at PokerStars HQ sifted through hours and hours of old videos from all of their tours over the years to find footage of bad beats, suckouts, devesting AA, and a few sensational hero calls that you heard about from someone at your table, or from someone in your home game.

In the first incident of bad beats... the hand played out at the 2019 EPT Bracelona. Simon Brandstrom faded a field of 1,988 runners (a record at the time) to win the EPT Barcelona for a €1.3 million score. The Swedish player defeated Marton Czuczor from Hungary to win the title, but the two were invovled in a hand in which Brandstrom rivered a huge chop when Czuczor flopped a straight.

In another hand at the 2019 EPT Barcelona, Ryhor Karapanau and Pasquale Braco sparred in a hand. Karapanau flopped a pair of Aces and rivered Aces up with two pair. However, Braco rivered a flush to suckout to win the hand.

In the last hand, French pro Gaelle Bauman moved all-in in a three-way pot. Both her opponents had her covered. She had pocket Aces and one of her opponents, Pasquale Braco, flopped two pair with good ole 8-6 offsuit. Ouch. Braco strikes again.

In the "What a call!" department, our good buddy Pasquale Braco had pocket Queens against Brazil's Kalvin Kerber at the 2019 EPT Barcelona. Kerber held

and trailed all the way. The board read

. Braco led with Queens against a pair of eights. Braco bet the river and Kerber moved all-in. Braco made a hero call and the rest is history.

At the 2019 EPT Prague, Dietrich Fast and Akin Tuna were involved in a hand. Tuna's

. Fast flopped a full house and things got ugly quick. Fast doubled thru Tuna. Fast would end up making that final table.

In the other hand, also at the EPT Prague, Gab Yong Kim and French pro Pierre Calamusa were in a hand. Calamusa's

. Yong Kim flopped an eight and rivered an eight to sink the Aces. Ouch. Sacre bleu!

It's been a wild week for David Peters, who won two events at the 2021 US Poker Open at the Aria in Las Vegas. He binked Event #10 $10,000 Short Deck and outlasted a small, yet sturdy field of 27 runners. Ali Imsirovic, Event #9 champ, busted in second place and missed winning consecutive events by one spot. Imsirovic retained his top spot on the 2021 USPO Leaderboard with 483 points. Peters moved into second place with 367 points after his second win and third cash overall.