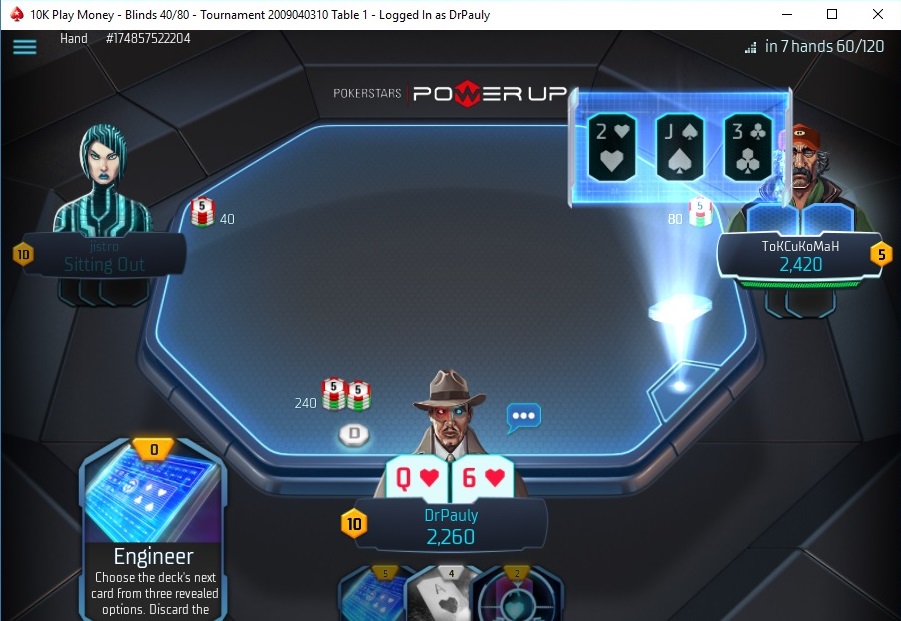 Ready for something new? PokerStars released another Alpha round of their new format POWER UP. What the heck is POWER UP? Power Up is a three-handed SNG with special POWER cards that help alter the outcome of a typical Texas Hold'em battle. Power Up is a winner-take-all event. PokerStars is trying to add variety to their current array of cash game tables and tournaments. PokerStars is in a race with other gaming companies to try to make online poker more appealing to the next generation of gamers. Tweaking poker and adding special powers is their way of trying to find the next big thing in poker.

ZOOM Poker (and it's older sibling RUSH POKER on Full Tilt) is probably the greatest innovation to hit online poker since the glorious boom in the early aughts. I'm not much of a fan of Spin&Gos. But Beat the Clock is a pretty fun way to spend a couple of minutes, despite the redonkulous juice.

Can Power Up become the next ZOOM in terms of popularity and innovation?

The current Alpha version of Power Up offers real money tables, in addition to play money. I gave it a whirl on the play money tables. My initial reaction was... this is kinda cool and different. After a few games, I was trying to figure out optimal strategy based on the various power cards. I'm sure someone will eventually right the Super/System version of Power Up. In the meantime, it's been fun testing out this newest incarnation of poker.

Here's a guide courtesy of PokerStars. Along with a POWER UP FAQ.

PokerStars mentioned they will add new powers in the future. For now, there are nine powers with different abilities. Each of these powers have varying costs from 2 to 5 power points, which you accumulate with every hand you play. You are allowed maximum three per hand.

Some of the cooler functions are of the rabbit-hunting variety. INTEL lets you view the next card in the deck for the remainder of the hand. The earlier you utilize this, the better advantage for you. The X-RAY power allows you to force your opponents to show one of their hole cards. This might be one of the strongest powers out of the nine.

A couple of powers allow you to alter the future of flop/turn/river cards. SCANNER allows you to view the next two cards in the deck and choose to keep them, or trash them. DISINTEGRATE allows you to nuke a specific card on the board. The ENGINEER lets you see three cards and you pick the best card to help you.

And you have a couple of powers to improve your hand preflop. RELOAD allows you to redraw a hole card. UPGRADE is sorta like the Pineapple power! It allows you to get a third hole card and then you choose which two to go to battle with.

CLONE is just what it suggests. You can clone the previous power played. This is vital when it comes to cards like the ENGINEER, or EMP.

And EMP is like a shield. This is vital if you have a big hand and you want to prevent opponents from altering the board or seeing any future cards.

Power cards require energy. That's what the YELLOW number next to your avatar represent. All players start with the same energy amount. There is a max energy, but you can replenish your energy as the game progresses. If you run out of energy, then you cannot play any power cards until you get the proper amount.

The X-RAY and CLONE cost the fewest amount of energy at 2 each. While the most expensive cost 5 energy: UPGRADE, RELOAD, and ENGINEER.

According to PokerStars rules, "When a player goes all-in for their entire stack, any existing board cards are locked and may not be targeted or affected by powers." That means you do not have to worry about anyone using DISINTEGRATE power against you.

All great/classic video games have some sort of oddball premise. PokerStars added a dystopian future backstory behind POWER UP. It's supposed to be 2047 and the biggest game in town is POWER UP. You get to choose your avatar/character too.