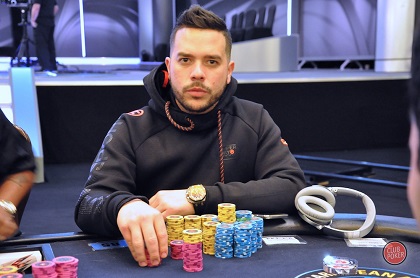 The Atlantis Casino and Resort in the Bahamas hosts the annual PCA once again. This year's festival of poker kicked off with the PokerStars Players Championship (PSPC). PokerStars cracked the nut that couldn't be cracked. The first-ever PSPC seemed like a whole bunch of hot air when it was first announced. But, give them all the credit in the world because they pulled off a heck of a job promoting the heck out of the inaugural PSPC and their coveted Platinum Pass valued in excess of $30K USD.

When the dust settled, a total of 1,039 players took a shot at the 2019 PSPC. And that's not a fugazi number either that includes juiced-up re-entries. Nope. The PSPC is a freezeout event, which is rare these days, with only a single entry. The former record for a 25K was 639 runners and PokerStars smashed that number with the PSPC.

Even with the Platinum Passes (320 of them), the event still attracted over 700 souls looking to take a shot at the free money that Stars added to the pool directly (added $1 million to first place) and indirectly (Platinum Passes).

According to a press release from Stars HQ, Eric Hollreiser, PokerStars Director of Poker Marketing said, "Passion and interest in poker is alive and well in 2019, and this tournament highlights the global excitement for the game. Tens of thousands of players participated in a year of unique promotions leading up to the event and that enthusiasm delivered one of the most exciting events in poker history."

Lots of celebs came out to play such as golfer Sergio Garcia, pro NBA star Paul Pierce, and that guy who screams stuff at UFC and boxing events. Oh and in the poker world, there were plenty of its own eclectic cast of characters such as the First Lady of Poker Linda Johnson and everyone's favorite bot @KevMath.

Registration for the PSPC was open through Day 2. When it was finally closed, the final numbers came in with 1,039. They calculated the prize pool and the top 181 lucky souls would get a cut of the juicy prize pool. The money bubble should bust early on Day 3.

Only 215 out of 1,039 players are remaining. Farrrid Jattin from Colombia bagged up the chip lead with 921K. Timex posted that Jattin owed him $70K and Jattin had been dodging him the last few years/ Hopefully Jattin cashes and Timex gets some of his makeup back.

For a complete update and updated chip counts, head over to PokerStars Blog. For French readers, check out venustyle's kick-ass coverage from the front lines in the Bahamas.