PSPC: How to win the first 19 Platinum Passes
by Pauly McGuire 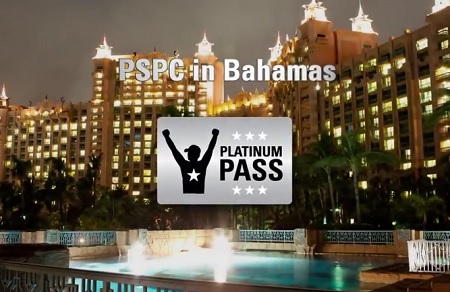 Did you ask Santa Claus or Hanukkah Harry for a special gift this year? Well, don't bother asking them for a Platinum Pass to the 2019 $25K PSPC... because you can only obtain a coveted Platinum Pass thru various PokerStars events with two paths to do so... online and live. Last week in Prague, PokerStars announced the creation of the PSPC a.k.a. the PokerStars Players No Limit Hold'em Championship. This special $25K event will take place January 6-10, 2019 in the Bahamas during the PCA. Players will have chances to win Platinum Passes to the PSPC through online tournaments or live events.

The crew at PokerStars HQ sent out an email blast explaining the giveaway for the first 19 passes to the first-ever PokerStars Players No Limit Hold'em Championship. What an awesome way to start the new year! PokerStars unveiled the specific details on how to win one of 19 passes up for grabs between now and the end of January.

Platinum Passes have a value estimated at $30K USD. That figure includes the buy-in to the PSPC ($25,000), approximate value of accommodations at the Atlantis Resort (~ $3,000), and $2,000 for travel expenses. Yeah, if you win a Platinum Pass, you get a free room and buy-in to PSPC, but you have to pay for your own flight.

PokerStars HQ announced three online paths to win a Platinum Pass with 6 total Platinum Passes up for grabs. At least four will be at stake during the Winter Series, starting on Christmas.

PokerStars HQ announced six live paths to win a Platinum Pass during various live global events in Italy, Bahamas, London, Ulster, Macau, and Sao Paulo, Brazil. Three will be in play during the PokerStars Festival in London starting January 22. The BSOP in Sao Paulo, Brazil will also give away 2 passes.

Stay tuned for more opportunities to win a Platinum Pass. Expect more announcements in early in 2018. For more details, check out this cool video…